Posted by Abhilash MS
The Kethu Naganathaswamy Temple or Kethu Navagraha Temple is one of the 9 Navagraha Temples in Tamil Nadu, located at Keezhperumpallam (Kizhaperumpallam), near Tarangampadi in Nagapattinam District. This renowned Kethu Sthalam is one of the most important Kethu Temples in Tamilnadu as well as in India. The temple presiding deities are Lord Naganathaswamy and his consort Soundaryanaki. It is said that Lord Kethu prayed to Lord Shiva to get rid of his sins. It is rare to find Ketu Bhagvan enshrined with head of a snake and body of an asura, which you can see here. In this Kethu temple, Lord Kethu faces west in the north praharam. Lord Ketu appears with the body in divine form, his head as a five-headed snake and the folded hands worshipping Lord Shiva. Kethu Naganathaswamy Temple is located 6 km from Thiruvengadu (Thiruvenkadu), which is famous for the Swetharanyeswarar Temple dedicated to Lord Budha. 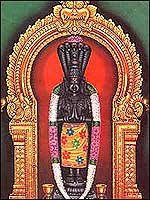 Keezhperumpallam is also called Vanagiri. The planets Kethu and Rahu, known as ‘Chaaya Grahangal’, are associated with the legend of the churning of the milky ocean. When the Devas and Asuras churned the ocean of milk with the Manthira Mountain as the churning stick and snake Vasuki as the rope, the amirtham emerged. This was consumed by an asura, who disguised himself as a Deva. Knowing this, Lord Narayana hit the asura on the head with the spoon in his hand. The head was cut off and fell on the ground. As the asura had consumed amirtham, his head and body continued to live. The head portion of the asura attached itself to a snake body and became Rahu Bhagavan. The body portion that was thrown away fell in Pothigai mountain region which was found and preserved by a Brahmin. The head of a snake got attached to the asura body to become Kethu.

Kethu Bhagavan is adorned in multicolor and it is believed that offering pooja to the Lord Kethu at Keezhperumpallam with red Lilly, kollu (horse gram), and cloth will get relieved from illness, poverty and other doshams.

Besides the worship services that are offered six times daily, Abhishekam is performed by 08.30 AM. Pradhoshams are held great reverence here. The specialty of Kethu Temple at Keezhperumpallam is that the temple remains open even during Rahu kalam and Emakanda Kalam.

The Kethu Temple at Keezhperumpallam is located around 63 km from Kumbakonam. It can also be reached via the Sirkali (Sirkazhi) - Poompuhar Road.

Shiyali Railway Station, Thanjavur is the nearest railway station, about 15 km from the temple.