Posted by Abhilash MS
Agneeswarar Temple at Kanjanoor or Agniswara Swami Temple at Kanjanur is one of the nine Navagraha Temples in Tamil Nadu and is associated with Lord Sukran (Planet Venus), the sixth of Navagraha planets. Also known as Sukran Navagraha Sthalam, Agniswarar temple is located around 18 km from Kumbakonam and 2 km to the east from Sooriyanayanar Kovil, on the Kallanai - Poompuhar road, in Tamilnadu.

It is said that Lord Brahma was blessed with a vision of Shiva's marriage with Parvathi here. The Braham Linga enshrined in the Agniswarar Temple is said to have worshipped by Lord Brahma. Another important feature is that the Oil Abishekam performed to the main Siva linga is fully absorbed by the idol. There is no separate sannidhi for Lord Sukra as Lord Shiva himself is believed to have incarnated as Venus here. 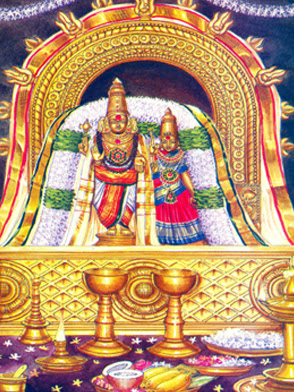 The Temple and its History

Located on the northern banks of river Cauveri, Kanjanoor Agneeswarar Temple or Kanjanur Agniswara Swami Temple is built with two prakarams. A five tiered Rajagopuram is seen at its entrance. Other deities worshipped here are Maanakkanjaarar, Nayanmaar and Kalikkaamar. Images that describe the legends relating to Haradatta Sivacharyar of Vaishnava origins, inscriptions from the Chola and Vijayanagar periods, and stone images of Natarajar and Sivakami are seen in this temple.

The Nataraja Sabha is referred to as the Mukti Mandapam and the Shiva Tandavam here is called as Mukti Tandavam. Legend says that Lord Shiva blessed Paraasara muni (Parasara Muni is the father of Vyasadeva and the author of Vishnu Puranam) with a vision of the cosmic dance - Mukti tandavam here.

One of the important features of the temple is that the Vilva leaf (Bilwa Leaf) seen here is 5 in number, which is quite unique.

Six worship services are offered daily. Fridays are considered auspicious to pray Lord Sukra. Sukran, the next most beneficial planet after Guru (Brihaspati), bestows his devotees with wealth and prosperity. If in a person's horoscope, Sukra is well placed, then the person enjoys better life and wealth. Lord Sukran is offered with white Lotus, white cloth, diamond, 'mochai' powder and athi to remove any obstacles in life and work caused by a misplaced Sukra (Sukira Dhosham) in a person’s horoscope.

A festival to honor Haradatta Sivacharyar is celebrated in the Tamil month of Thai every year. Besides, Mahasivaratri, Aadi Pooram, Navaratri, and Arudra Darisanam are also celebrated with much importance.

The temple is located about 20 km from Mayiladuthurai. Bus facilities are available from Kumbakonam and Mayiladuthurai. Aduthurai Railway Station is the nearest railway station.

Suryanar Kovil, about 2 km from Kanjanoor, is the nearest Navagraha Temple dedicated to Lord Sun. Sri Sarabeswarar Temple at Thiruvhuvanam, Sri Mahalinga Swami Temple at Thiruvidaimaruthur, and Sri Kalyanasundara Swamy Temple at Thirumanancheri are other nearby temples of prime importance.