Agni Purana - One of the 18 major Puranas of Hinduism

Posted by Hindu Devotional Blog
Agni Purana is one of the eighteen sagas related to Hindu beliefs and considered as a characteristic encyclopedia in Hinduism. This is a featured knowledge book in which the contents are in the form of stories told by Lord Agni Deva to Sage Vashista who then passed those details to Sage Vyasa. After that, saint Suta the prominent follower of sage Vyasa learnt them from his master. While he was on pilgrimage once, he taught such details to certain other saints in the forest. These contents are narrated in sixteen thousand stanzas arranged in three hundred and eighty three chapters. They are stories from Ramayana, Mahabharata, and Bhagavad Gita with certain incarnations. Since these tales are first told by Agni Deva, this saga is termed as Agni Purana.

According to Agni Purana earth is created from water, water is from fire, fire is originated from air, air is formed from sky and the source of sky is Brahma (the power of almighty). The only way to attain Brahma is awareness. In other words human beings can reach god by collecting sacred information. To fulfill this, numerous divine incarnations are well explained in Agni Purana. It provides proper guidance regarding methods of worship, concept of liberation, importance of fasting, benefit of charity and also provides some essential knowledge required for daily life. In this, the significance of wisdom is very well highlighted. Since these matters are explained with related stories, the details of Agni Purana are easy to understand. Hence, this acts as a supporter in learning other ancient sagas. 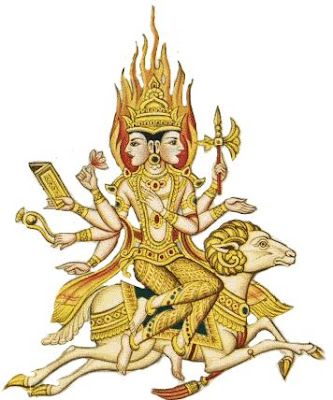 In the first few chapters of the Agni Purana the descriptions are about avatars of Vishnu. These are the divine forms taken by Gods to fight against evil spirits. The sacred personifications of Lord Vishnu as Sree Rama and Sree Krishna are depicted with respect to the tales based on Ramayana and Mahabharata. Other avatars of Lord Vishnu mentioned in Agni Purana are Matsya, Kurma, Varaha, Narasimha, Vamana, Balarama, Parasurama, and Kalki. The last incarnation called Kalki is yet to be occurred. Agni Purana also tells about rituals, offerings, pilgrims, astrology, astronomy, art, birth, creation, sculptors, geography, medicines, science, dreams, omens, archery, economics, grammar, and yoga.

There are descriptions in Agni Purana about various religious procedures as well as traditions. The systematic way of performing such ceremonies are mentioned briefly in it. It also explains the customs and formalities to be carried out during temple constructions and idol consecrations. As per this, the construction of temples and sculpturing of idols are very sacred events. Agni Purana also tells about the worship of Shiva Linga, Lord Vishnu, Ganesha, Surya and other deities with their favorite incantations. Agni Purana points out the importance of bathing before every prayers and sacraments. Devotees are advised to take bath properly prior to any type of reverence. This saga is said to have preached after so many primitive narrations. Hence certain information and tales mentioned in them are not included in Agni Purana.