Posted by Abhilash MS
Kurma Purana is one of the 18 Puranas in Hinduism. This was first recited by Lord Vishnu to his favorite disciple Sage Narada who later told these tales to Sage Suta who in turn narrated the same at the assembly of eminent saints. The contents are about the Kurma incarnation of Mahavishnu which is assumed to have taken place before the universal creation. There are also descriptions about the glory of Vishnu and his consort Goddess Lakshmi. The mystic forms of the Goddess are told in this text in detail. Both Mahalaksmi and Vishnu are depicted as resting on the serpent Anantha. Kurma Purana is the only saga where the different incarnations of Lord Shiva are mentioned with all its magnificence and sacredness.

Kurma Purana comprises of four parts called Brahma Samhita, Bhagavathi Samhita, Gauri Samhita and Vaishnavi Samhita. It is said that only Brahma Samhita is available to read currently which is further divided into two parts Purva and Uttara. The first part contains 53 chapters whereas in the latter 46 chapters. In the first part, there are descriptions about four eras, preaching of gods, story of the grant sacrament organized by Daksha, mysteries behind the incarnation of Vishnu as Narasimha, races of Ikshvaku and Pururava, worshipping of Lord Siva in Linga form, explanations on pilgrim centers such as Varasani, Prayag, and Yamuna. In the second part there are mentions about metaphysics, edible and non-edible things, daily rituals and duties to be carried out during Vanaprastha.

Kurma Purana provides knowledge about the four stages of man in life. They are student, householder, forest dwelling and hermit hood. Student life is the period of studying whereas in the householder stage the concerned person has to maintain sanity in the house and keep it prevailed always. In the absence of the householder, such tasks are to be performed by his wife. In the forest dwelling stage individuals withdraw from homely matters and concentrate on meditation and godly matters. For experiencing this stage they must get prepared mentally in advance. The last stage called hermit hood is the total transformation of an individual into a real saint. Various fasting methods are also mentioned in this text as sacrifices to the sin committed in human life. 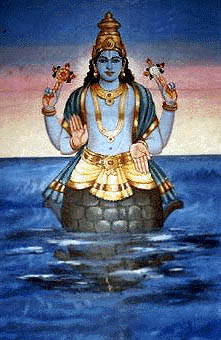 This ancient historical text also covers origin of the Universe, dignity and importance of the race Brahman, all aspects related to human life and philosophy. According to this text, there was only water everywhere after the destruction of the entire Cosmos. Later, gods, demons, mountains, rivers, and animals happened to be in the Universe. The area of water was far greater than the area of the land in the cosmos. In addition, there were separate regions for air and sky. It was at this juncture that the responsibility of the three major gods – Vishnu, Mahadeva and Brahma were determined. There are also mentions about important pilgrim centers with the significance and need of conducting pilgrimage. The outcome of dedicated worship is well explained in Kurma Purana.