Posted by Abhilash MS
Narayana Suktam Lyrics and English meaning. Narayana Sukta is a hymn in Yajurveda. The suktham is dedicated to Lord Narayana, the supreme deity in Vaishnavism

Let Brahmam protect the teacher-student duo,
And also protect us,
We would work with vigour,
Let our learning be lustrous,
Let not we quarrel among ourselves,
Let there be peace, peace and peace.

I meditate on God Narayana,
Who is much greater than this world,
Who is forever,
Who is the world,
Who destroys sins and suffering,
And say, that this world is Purusha,
And is alive because he is inside it.

I meditate on Narayana,
Who owns this world,
Who is the god of all souls,
Who is forever,
Who is personification of good,
Who never slips,
Who needs to be known with great effort,
Who is the soul of everything,
And who is the great destination. 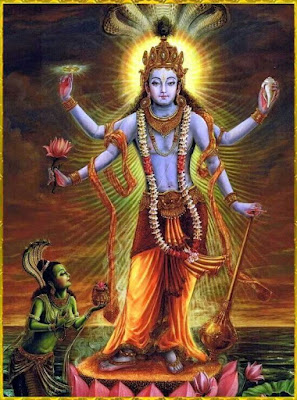 Narayana is spread,
All over the world.
In everything that we see and hear,
And in its inside and outside.

I meditate on God Narayana,
Who is endless,
Who is indestructible,
Who is all knowing,
Who is inside the sea,
And who does good to all world.
I also state that the heart hangs like an inverted lotus bud.

Inside the heart,
Which is Just below the collarbone,
And one hand above the belly button,
Shines .as if it is surrounded by a flame,
The greatest habitat of the universe

Inside the center of the heart,
There is an ever-shining fire,
Which is spread in all directions,
And that fire which burns stable,
Sees everywhere,
Never gets old,
And divides and supplies the food.

The rays of that fire is always spread,
All over from one end to other,
And throughout the length,
And from head to foot,
And the body of that fire,
Heats our body allover,
And its one thin flame,
Shines erect in the center of the heart.


Like the sparkle of lightning,
From within a black dark cloud,
Like the sprout of a red paddy,
Thin and golden,
And as tiny as an atom,
That flame continues burning.

In the center of the flame lives the all-pervasive God.
Who is Brahma,
Who is Shiva,
Who is Vishnu,
Who is Indra,
Who is perennial and ever living,
And He is the greatest emperor.

Let us try to know that Lord Narayana,
Let us try to meditate on that Vasudeva,
And let that Vishnu employ us to do good deeds.