Posted by Abhilash MS
Brahma Purana which is also known as Adi Purana is an important Hindu religious scripture. It has got a reputed rank among the major eighteen Mahapuranas. This is a classical literature where the aspects of human life are explained with respect to different stages. As per the contents, Brahma Purana is dived in to two sections called former part or Purva Bhag and latter part or Uttar Bhag. In the previous part there are descriptions about the creation of Universe and life. Here the personifications of Sree Rama and Sree Krishna, and their ideal activities are pointed out. In the latter part, the details are about a pilgrim center called Purushotham Thirtha. There are also narrations regarding the Sun Temple at Konark which belongs to the Orissa state in India. Padma Purana categorizes Brahma Purana as a Rajas Purana – purana which represents dimness and passion.

In Brahma Purana, the contents are in the form of teachings by Lord Brahma to Daksha. There are nearly fourteen thousand sacred stanzas in the text arranged in the two hundred and forty six chapters. According to Narada Purana the verses in Brahma Purana are only ten thousand. Since these contents were first told by Brahma to the sages of Mount Meru, the saga came to know after his name. Narrations regarding the birth of Manu and his descendants are the other main topics. There are references about Lord Shiva and Lord Vishnu with their favorite incantations. The text also tells about pilgrim centers near holy river Ganga, sacred ceremonies and godly offerings. The details about earth, Gods, demigods, heaven and hell with its various sections are really interesting. 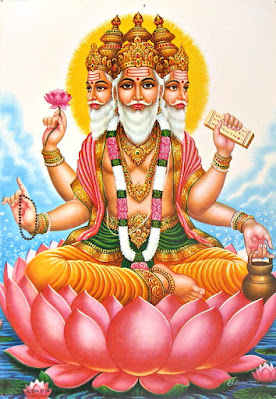 Significance of Surya and Chandra Worship

Unlike other prehistoric texts, Brahma Purana highlights the unique association of Lord Shiva with Sun God. There are mentions regarding the family of Sun and the benefit of worshiping him. As per the verses in the text, veneration of Sun is the easy method to achieve salvation in life. It also indicates the importance of sun temple and the advantage of worshiping the deity from the consecrated site. Reverence of moon is also significant according to this saga. It says to worship moon in association with the Sun God. Besides, Brahma Purana stresses the need to practice Yoga and meditation. They have divine powers to retain calm and peace in life. It also talks about some moral principles and refuge centers from where knowledge on salvation is obtained.

The glory of Brahma Purana is very exclusive among the scriptures of this kind. In this text, there are references regarding the importance of self sacrifice and charity. Reading and hearing the contents of this saga are considered as very divine. It is assumed that Brahma Purana is to be read at least once in life. Auspicious days and ideal timeframe are to be decided for this sacred event. It is believed that this act is an alternative procedure to get released from the outcome of all types of sins and evil deeds. The result of this holy attempt will be very amazing since it provides eternal wealth, awareness and spirituality. It offers qualities like harmony, selflessness and absolute contentment in life and helps to attain liberation at last.