Posted by Abhilash MS
Harivamsa Purana which is also termed as Harivamsa is considered as the supplement to the great epic Mahabharata. This prehistoric text appears as a group of mythological tales where the activities of Lord Vishnu related to the preservation of the Universe are glorified. His incarnation as Krishna is well depicted in this scripture. Here, these details are arranged in more than sixteen thousand holy verses. The information regarding the author of the text is not known to anybody. Hence this saga is believed to be the collection of works done by different authors. The contents of the text are first recited by Vaisampayana to king Janamejaya while Sauti, narrated the same to sages at Naimisharanya.

Harivamsa Purana is divided into three sections namely Harivamsa Parva, Vishnu Parva and Bhavishyat Parva where the contents are arranged in chapters. Thus in Harivamsa Parva there is 55 chapters, in Vishnu Parva128 chapters where as in Bhavishyat Parva 135 chapters. Each chapter has contents in verses to glorify Lord Vishnu, Lord Shiva and Krishna. In Harivamsa Parva the verses are mainly regarding the various incarnations of Mahavishnu. Here, the descriptions are about the creation of the Universe and the glories of Vishnu. A number of mythological tales based on these incarnations are depicted in this section. Certain incarnations by Mahavishnu to safeguard the Universe are Kurma, Varaha, Matsya, Narasimha, Vamana etc. Among them, the well known incarnation as Krishna is described with great importance. 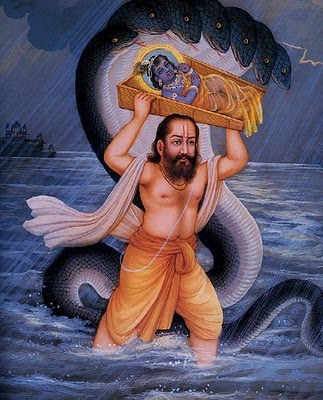 In the second section Vishnu Parva, the life history of Sree Krishna that comes before the events in Mahabharata is explained. This section deals with an in-depth study of lord Krishna based on the mythological beliefs. They include the teenage life of Krishna and his miraculous activities. His amusement at Vrindavan with Radha and her companions are explained beautifully. The incarnation of Vishnu as Krishna was his eighth one. Apart from this, the section also refers the unique battles between Lord Siva and Vishnu. In the last section Bhavishyat Parva there are references about the failure of King Janamejaya’s Horse sacrifice. It also provides details on Kali Yuga with a list of probable kings to be ruled in future. The incarnation of Vishnu as a white winged horse in Kali Yuga is also narrated here.

The mythological versions of Mahabharata appear in different forms in Harivamsa Purana. But, both of these sagas cannot be considered as identical. Since the subject matters related to the creation of the cosmos are blended with mythologies, they are slightly confused. The stanzas related to Krishna’s teachings in Bhagavat Geetha are also available in this scripture. Hence, it is believed to be sacred to hear the verses from this text. Here, the matters related to Krishna are explained in a typical style to enable the readers to enjoy the pleasure of reading. This qualitative feature of Harivamsa Purana is not available from any other sagas of this kind. In this scripture, there are mentions about the last personification of Lord Vishnu to be taken place at the end of Kali Yuga.