Posted by Abhilash MS
Matsya Purana comes sixteenth among the eighteen great sagas in Hinduism. This satisfies the five characteristic features of any classic text. Matsya Purana tells about the incarnation of Lord Vishnu as fish (matsya) during the period of the great flood which annihilated the whole Universe. A total destruction of the cosmos was informed through this narration. The intention of his embodiment as fish was to protect the seeds of all living samples. There are also descriptions about other personifications of Lord Vishnu which enabled him to preserve the Universe from evil spirits. The contents of this Hindu Purana provide knowledge about prominent royal dynasties who ruled their kingdoms superbly. Later, this tale was told to King Pareekshith who preferred to hear the incarnations of Lord Narayana during his last days to achieve salvation.

In Matsya Purana there is information about the incidents that had taken place before the fish incarnation of Lord Vishnu. Thus, the man-lion embodiment of this deity which occurred before the creation of this text has described in it with great significance. The value of fasting and guidelines about major pilgrim centers is really helpful to the devotees. Tales related to Solar, Lunar and Kuru dynasties with their family trees has been explained in this saga with utmost importance. Interesting stories about King Yayathi, Karthaveerarjuna, Sathyavan and Savithri are available from this narrative. Birth of Goddess Parvathi and the destruction of Kamadeva by the third eye of Lord Shiva are mentioned with utmost magnitude. In this saga the divinity of both Vishnu and Shiva are portrayed equally. 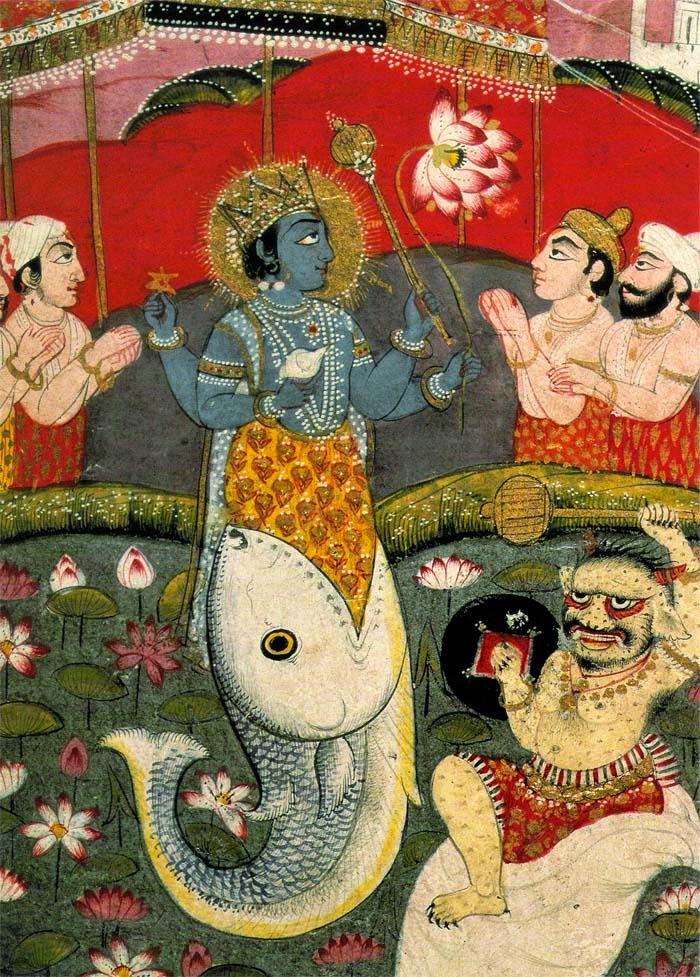 Matsya Purana points out the appearance of idols at different locations and construction of shrines for them. The movements of planets in the universe which may cause favorable and unfavorable effects to the living beings are also mentioned here. There are chapters where religious rites and festivals are described. These ceremonial procedures are highly related to both Shiva and Vishnu. The explanations about consecration of idols and sacraments to be performed are very much helpful for enhancing the glory of deities. There are descriptions about construction of temples and sixteen types of donations which are really sanctified. Unlike other sagas, there are details regarding the Hayagreeva incarnation of Vishnu, by which he protected the treasures of knowledge from a devastating fire that burnt the Universe.

Matsya Purana tells about how Lord Vishnu and king Manu saved various life species in the Universe during the great floods. For this purpose Manu secured a boon from Lord Brahma in advance and arranged shelter to all types of living beings in a boat which was later dragged safely by the fish incarnation of Vishnu through the disastrous water flow. All these are explained beautifully within the fourteen thousand holy verses of this saga. This narrative has so many divine qualities to demolish sin, provide life status, extend lifespan and sanctify life. It offers the positive effects of bathing in holy lakes mentioned in ancient tales and makes aware the uprightness of life. There are also excellent explanations regarding the traditional Hindu architectures and sculptures.