Posted by Abhilash MS
Bhavishya Purana is an ancient historical text written in Sanskrit language in which the future events are foretold. This is the eleventh scripture among the eighteen puranas or important ancient texts and assumed to have written by the prominent sage Veda Vyasa. Bhavishya Purana is considered as a treasure of knowledge where the prophecies and information are presented marvelously. Though this text was written thousands of years back, the events mentioned in it are already happened. Because of the possession of supernatural powers, Rishi Vyasa could foresee the written events in advance. This narration is considered as an attempt from his side to set up the pre-eminence of ‘Brahma’, the almighty. According to certain scholars, some of the contents of this saga are from the ancient law book of Manu.

Parvans or Parts of Bhavishya Purana

Bhavishya Purana scripture is differentiated in to five major parts. In the first part, the descriptions are mainly about the origin of life in the Universe. There are explanations on veneration, reverence of deities like Vishnu, Shiva, Surya, Ganesha and Skanda, references about certain significant snakes and the need to worship them. The separate section where the Sun God worship is explained is very important. Various traditional ceremonies and auspicious occasions with feasts are also mentioned here. Certain important duties of women, recognition of people from their good and bad signs are very valuable information. Apart from this, there are descriptions about certain characteristic features of men and women based on the quality and category of their faces which in other words termed as ‘Physiognomy’. 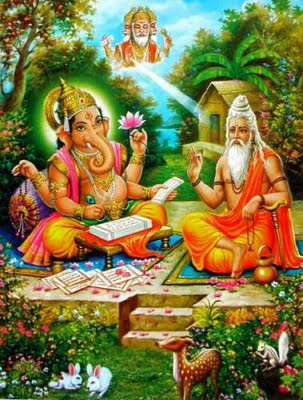 In the second, third and fourth sections of Bhavishya Purana there are details about the magnitudes of significant deities. The predictions about the arrival of prophet Muhammed and Jesus Christ, and their activities to uplift mankind are really wonderful. There are also narrations regarding Adam and Eve, and Noah’s ark. Awareness about Sri Buddha, Madhavacharya, Emperor Asoka, Chandragupta, and Jayadeva can be secured from the text. It reveals the arrival of Mughals and Shaws in Delhi and mentions about Kuthabddin and Timur. There is also information about the foreign rule in India. Details regarding the glories of various devotional services, predictions of Lord Chaitanya, information about Kali Yuga and its evil nature etc can be understood from the scripture. The creation of three worlds in the universe is explained beautifully.

Information about arrival of Kalki

In the fifth part of the scripture, Lunar (Chandra) and Solar (Surya) dynasties and the prominent kings belong to these reigns are mentioned. Definition and specialties of heaven are added in this section. One ancient royal game very much similar to the chess of modern times is cited here. In this prehistoric text, there are references about the fall of the divine language Sanskrit and the introduction of various other languages. The Sage Veda Vyasa has mentioned about the arrival of Kalki who will be normalizing the disturbances in the world by introducing unique Universal set ups. The false and good nature of all kinds of activities is mentioned here with historical evidences and traditional tales. All these information is accommodated within the 14500 verses of the scripture.