Posted by Hindu Devotional Blog
Bhagavata Purana is well known by the name Srimad Bhagavatam. Its publicity is very high when compared to other Hindu puranas of its kind. Bhagavata Purana is formed of 18000 stanzas accommodated in 332 chapters which in turn are differentiated in to twelve Cantos. As per historical evidences it is considered that this would have created either in eighth or ninth century. Srimad Bhagavatam is a collection of unique theories which are well explained by means of very thoughtful as well as impressive stories. Unlike other sagas of this kind, Bhagavata Purana gives priority to the feelings and views of common people and thus maintains a steady relationship with them. The significant part of this saga is the devotional methodologies towards almighty which can be performed through selfless love.

Bhagavata Purana which was originally written in Sanskrit is considered as the spirit of Hindu mythological beliefs. Nowadays this has been translated into prominent Indian languages and English. Thus, the qualitative philosophical awareness of this nation has been widely spread all over the world. Since the lines of this tale emphasize the glory of Lord Vishnu, the saga is called Bhagavata Purana. Lord Vishnu is one of the premier deities and safeguards the Universe by various sacred incarnations. Here, the major theoretical concepts are based on the childhood stories of Sree Krishna, the significant embodiment of Lord Vishnu. They are song-stories which highlight the importance of veneration. In the first section of the text, there are explanations on devotees who enjoyed the pleasure of their faultless devotion. 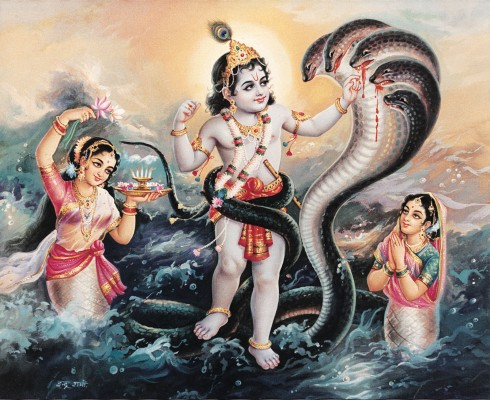 Important Texts on Bhakti and Salvation

In Bhagavata Purana the history of Universe and the intention of life are clarified based on the personification as Bhagavan Krishna. As per this, the association with Bhagavan can be achieved by selfless devotion and sacred love. In addition, the saga depicts other important avatars of Lord Vishnu with the explanations of his activities and adventures. The objectives of such personifications were to retain ethical and religious ideologies by destroying the evils. In this text, ancient scriptures of metaphysics are described in an easily understandable manner. Here, it touches every aspects of self nature and source of Universe in such a way to develop the capacity of knowledge. In this attempt, there mentioned the meaning of life, responsibilities, birth and also about the relationship between Bhagavan Krishna and his worshipers.

As per other sagas, the four important aspects of human life are morality, pleasure, wealth and salvation. In Bagavatha Purana the importance of devotion is also added together with these four well known qualities. By holding principles and practicing worship, salvation can be achieved without much difficulty. Thus devotees can experience the satisfaction of liberation either by chanting the favorite incantations of Bhagavan Krishna or by listening and learning his teachings. Apart from total dedication other important essentialities for absolute salvation are wisdom and dispassion which are explained as lack of concern and desires. In this text, devotion is more significant than spirituality. It highlights liberation through devotion irrespective of believes and social status. According to Baghavata Purana, only poor can be the true believers of deities and hence criticizes material possessions and enjoyment of wealth.