Posted by Abhilash MS
2022 Karadaiyan Nombu is celebrated on 14 March, Sunday. Karadayan Nombu is a major Tamil festival celebrated at the time of Meena Sankramam - ending of the Tamil month of Maasi (Malayalam month Kumbham) and beginning of Panguni (Meenam in Malayalam). Also known as Savitri Vrat,
Karadayan Nonbu ritual is observed by all married women for the well being of their husband and that the couples should remain together always. Unmarried women also observe Karadaiyan Nonbu and pray to Goddess Shakti to get good men as their husband. Karadaiyan Nombu is celebrated in honour of Sathi Savithri’s success in bringing back her husband Satyavan’s life from the hands of Yama Dev, the God of Death. This is why the ritual is known as Savitri Nonbu. 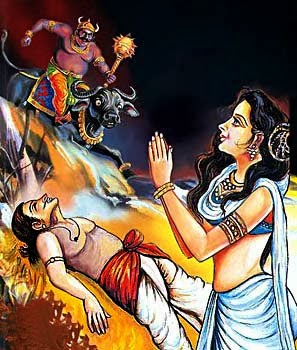 How to perform Karadayan Nonbu Puja

On the day of Karadaiyan Nonbu, women prepare a sweet prasadam known as Karadiyan Adai. Karadiyan Nonbu Adai is specially prepared for the Karadayan pooja with rice flour, jaggery and a red coloured dry beans known as Kaaramani. After the Karadiyan Adai preparation it is time to start the Karadaiyan puja. All female members in the family will get ready to start the puja. Kolams (rangoli) will be drawn by all ladies in front of the pooja place and a banana leaf will be placed on each kolam. The women in the family perform the nivedyam after placing one sweet Karadai, one Kozhukkattai, a blob of fresh butter, two bananas, arali flowers, betel leaves and nuts, and the most important Nonbu Charadu. Nonbu Charadu or Manjal Saradu is a sacred yellow cotton thread dipped in turmeric paste and tied in the middle with some flower. The puja starts and the naivedyam is offered to Goddess Gowri (Kamakshi) or Goddess Shakti. While offering the women chant this mantra:

After wearing the sacred yellow cotton string the prasadam is taken by the offerers. The manjal saradu will not be removed until the next Karadaiyan Nonbu ritual. Following the tradition of Kaaradayan Nonbu every year is believed to attain Dheerga Sowmangalyam (a long married life).

Karadaiyan Nonbu festival is celebrated with great importance on the Southern states of Tamil Nadu, Kerala, Karnataka, and Andhra Pradesh.