Posted by Abhilash MS
Swetharanyeswarar Temple at Thiruvenkadu, the fourth Navagraha sthalam of the 9 Navagraha Temples in Tamil Nadu, is the abode for Bhudhan or Bhuda (planet Mercury). Thiruvenkadu Bhudha Sthalam is located near Poompuhar, around 10 km from Sirkazhi, 24 km east of Mayuram and 59 km from Kumbakonam. The presiding deity is Lord Shiva as Swedharanyeshwarar and Goddess Parvati as Brahma Vidya Nayaki Ambal (Brahmavidyanayaki). Swetharanyeswarar Temple enshrines a separate sanctum sanctorum for Bhudhan or Bhudan, one the nine Navagrahas and the bestower of wisdom and wealth.

The name Thiruvenkadu, also spelled Thiruvengadu, means ‘sacred white forest’ (Ven means white and Kadu means forest). It is said that this place was surrounded by thick forests on all sides and when seen from a distance, it looked white, and hence the name. In Sanskrit it is known as Swetaranyam (Swetam means white and Aranyam means forest). The place also bears various names such as Jnana-aranya, (forest of wisdom), Patala Kailas and Aadi Chidambaram.

It is said that the Lord performed seven of His dances - Tandavam - known as Ananda, Sandhya, Samhara, Tripuranta, Urdhva, Bhujanga and Lalita. 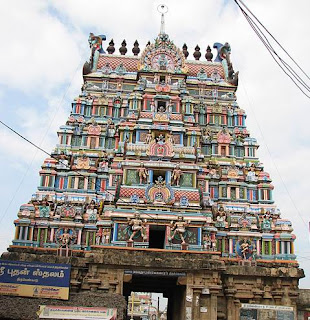 Worship to Lord Shiva's fiery form Aghoramurthy is considered to be of great importance especially on Sunday nights.

Budhan is the planetary ruler for knowledge, music, astrology, Maths, sculpting, medicine and language skills. Wednesdays are very auspicious to Budha and offering pooja on that day is believed to rectify any Budhan Dhosham in horoscope. Budha is attired in green and can be offered with green moong dhal, white kanthal flower and green cloth.

The most important festival is the float festival which is celebrated on the last day of 12 day celebrations in the Tamil month of Maasi (February - March).

Swetharanyeswarar Temple is situated 23 kilometers away from Mayiladuthurai, on the Sirkali – Poompuhar linking road. The temple is 10 km from Sirkazhi and 59 km from Kumbakonam.