Posted by Abhilash MS
Kailasanathar Temple, the second of the 9 Navagraham Temples in Tamilnadu, dedicated to Lord Chandra (Moon God), the second graha of the Navagrahas. This Chandra Navagraha Stalam is located at Thingaloor which is about 8 km from Tiruvaiyaru near Thanjavur in Tamilnadu. Thingaloor is named after the Tamil word, ‘Thingal’, which means Chandra or Moon. As most of the other Navagraha Temples of Tamilnadu, Kailasanathar Temple is also a Shiva Stalam and the main deities worshipped here are Kailasanathar and Goddess Periyanakiamman.

Legend says it that the Lord Chandra worshipped Lord Shiva here to save him from a curse and gained his blessings. Hence it is believed that those who have any Chandra Dosha in their horoscopes can get relief from suffering by offering prayers and perfoming pujas to Lord Kailasanathar, Goddess Periyanayaki and Chandra Bhagwan. Devotees who worship Lord Chandra are blessed with good health, mother’s welfare, and get rid of the stress and sorrow in daily life. 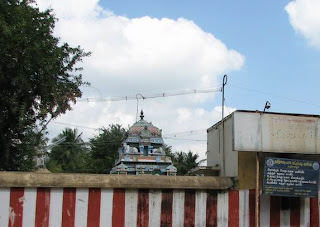 Thingaloor Kailasanathar Temple is about 1500 years old. Built in the 7th century by Pallava King Rajasimha, this ancient Shaivite shrine reflects the early Dravidian architecture. A huge Nandi is seen in the front, facing the temple. The 16-sided Shiva lingam at the main shrine is made out of black granite. A unique feature of Thingaloor Temple is that during the months of Puratasi (September - October) and Panguni (March - April), the rays of the moon fall on the Shiva Lingam. The architectural style and the decorations carved on this temple are added features.

This Chandra Sthalam is associated with the life of Tirunavukkarasar, one of the 63 Nayanmars (Saivite saints). Legend says that there lived a merchant, Appoodi Adikal, at Thingaloor, who was a devotee of Tirunavukkarasar. Appoodi Adigal had an opportunity to host the saint, when he visited Thingaloor. At the same time, his son was bitten by a venomous snake. However, the merchant continued to serve the saint without revealing the tragedy. The saint was inspired by his devotion and restored the boy’s life by singing songs in praise of Lord Shiva at this temple. This collection of ten songs came to be known as ‘Thirupathikam’.

As Lord Chandran’s color is white, he is offered with raw rice mixed with jaggery, white Arali (a flower), and white clothing. It is believed that this pooja removes obstacles in life. Besides, special pujas are performed on all full moon days.