There are 15 idols in the Badrinarayan temple complex which are sculpted in black stone. The main idol of Lord Vishnu is of black stone and is seated in meditative pose. The temple also enshrines the images of Garuda Vahana (the vehicle of Lord Vishnu) and Goddess Maha Lakshmi. Badrinath Temple is believed to have been built by Guru Adi Shankaracharya - an 8th century's philosopher-saint from Kerala. Adi Shankara had also established a 'math' here. Next to the Badrinath temple is the Tapt Kund - a natural thermal spring on the banks of the river Alaknanda, where devotees usually take a holy dip before entering the temple. The water of Tapt Kund is said to have medicinal properties. 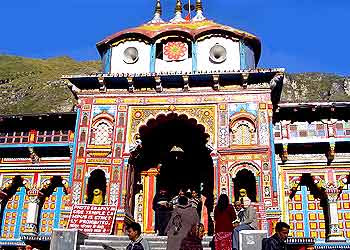 Situated at an altitude of 3,133 meters above the sea level, Badrinath Temple is about 15 m tall with a small cupola on top, covered with a gold gilt roof. The front wall is built of stone, with arched windows. A broad stairway directs to a tall arched gateway, the main entrance. The architecture is similar to a Buddhist vihara (temple). A mandapa is seen inside, which is a large pillared hall that leads to the garbha graha, or main shrine area. The walls and pillars of the mandapa are decorated with carvings.

Badrinath town is situated in the district of Chamoli in the Garhwal region of Uttaranchal. Located on the right bank of the river Alaknanda, Badrinath is surrounded by the two mountain ranges of Nar and Narayan on its two sides with the Neelkanth peak as its backdrop. Badrinath is a famous Char Dham Pilgrimage site for the Hindus and Sikhs owing to the holy Lord Vishnu Badrinath temple situated here.

Legend says that when the Goddess Ganga was requested to flow down to earth to help the humanity, the earth was unable to bear up the force of her fall. Hence she was split into twelve holy channels and Alaknanda is one of them. It later became the residence of Badrinath.

There are few other smaller Badrinarayan Temples, which are together known as Panch Badris or Five Badris. The other Badris are the Yog Dhyan-Badri or Yogadhyan Badri, known for the idol of Lord Vishnu in meditative position, Adi Badri known for a group of 16 temples, Briddha-Badri - renowned as the earliest shrine of Badrinath and Bhavishya-Badri, an alternative seat of Lord Badrinath. All these temples are worth visiting.

The opening date of Badrinath Temple is fixed on Basant Panchami and closure date is fixed on Vijaydashmi. The temple opens every year in the month of April-May and closes for winters in the third week of November. Joshimath is the winter deity of Badrinath.

Special booking of pujas can be done at Badrinath Mandir Committee. The pooja is organized before the temple is opened for public. Some major Hindu festivals celebrated at the Badrinath Temple include Mata Murti ka mela, Krishna Janamashtami and Badri-Kedar utsav.

How to Reach Badrinath Temple

The nearest airport is the Jolly Grant Airport near Dehradun (317 km). The nearest railway stations are at Haridwar (310 km), Rishikesh (297 km) and Kotdwar (327 km). Frequent buses are available from New Delhi, Haridwar and Rishikesh. From Gaurikund (near Kedarnath) to Badrinath by road is 233 km.

Valley of Flowers, situated nearby, is rich in rare varieties of flowers. Hemkund Sahib, 43 km away, is an important pilgrimage of the Sikhs and Hindus. Nearby is the Lakshman Temple where Lakshman - the brother of Lord Rama performed his penance.