Posted by Abhilash MS
Chitra Pournami or Chitirai Purnima is a Tamil ceremony observed on the Poornima day (full moon day) in the Tamil month of Chitirai (April – May). Chitra Pournami ritual commemorates Chitragupta who according to the scripts is the assistant of Lord Yama, the God of Death. The day is also dedicated to Indra, the head of Devas.
It is on this day that the star Chitra and full moon come together. Considered as Chitragupta’s Birthday, the Chitra Pournami or Chitirai Poornima 2022 date is on 16 April.
Chitragupta means collection of pictures. It is believed that Chitragupta examines the good and bad performances of the person. When a person dies, his soul first goes to Lord Yama, where Chitragupta tallies the deeds and report it to Yama. On this day, special poojas are conducted at temples and people take bath in holy rivers and temple ponds to wash away the sins committed.

Chitragupta Temple at Kanchipuram is the only one temple in South India dedicated to Chitragupta. Thirukoteeswarar temple at Thirukodikaval, situated on the Kumbakonam - Mayiladuthurai route, has separate shrines for Chitragupta and Yama. In these temples, Chitra Pournami festival is celebrated in a grand manner every year. 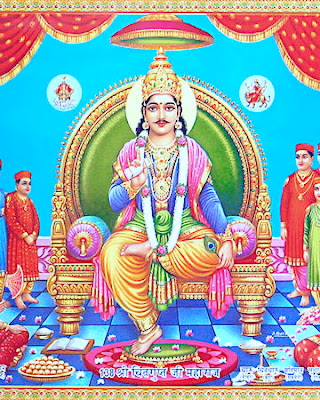 There is a legend associated with Chitra Poornima involving Lord Indra, the king of Gods, and his Guru Brihaspati. Lord Indra and Brihaspati once had an argument. As Indra failed to respect Guru, he stopped advising Indra who started committing sins in the absence of Guru. Days passed and Brihaspathi returned to his duty. He advised Indra for a pilgrimage to the earth to lessen the burden of sins. During the pilgrimage, Indra realized that he had been redeemed from the sins. He found a Shiva lingam under a Kadamba tree and believed that Lord Shiva had helped him in relieving his sins. Following this, he started worshipping him. He worshipped Lord Shiva with a golden lotus which he found from a nearby pond.

The Mangaladevi Temple located at Kumily in Idukki, Kerala also celebrated Chithra Pournami festival with much religious fervor. Mangala Devi Temple is build in Pandya style of architecture is dedicated to Kannagi or Kannaki Amman, the main character of the South Indian epic Silapathikaram. The temple is around 2000 years old and remains closed for the entire year except for Chithra Pournami Festival. Hundreds of pilgrims from Kerala and the nearby state of Tamil Nadu visit the shrine during the festive occasion.