How to Observe Ekadashi - Signifance of Ekadasi Fasting

Posted by Abhilash MS
Ekadasi or Ekadashi is a Sanskrit word derived from the words, Eka which means one and dasi, the womanly form of the word dasa (which means ten). Ekadashi, also known as Agyaars, falls on the eleventh day after the full moon and again eleventh day after the new moon of every month. Thus, Ekadasi occurs twice in a month one of the 11th day of shukla paksha and another one on the 11th day of krishna paksha (dark). Hence there are twenty four Ekadasis in a year. In Hindu religion, Ekadashi day is meant for fasting and people observe a complete fast on this day, to please Lord Maha Vishnu. Observing Ekadasi Vrat enhances spiritual development.

How to observe Ekadashi Fasting

As stated by the Vedic scripts, Ekadashi fast begins on the day before the Ekadasi, on the Dashami (the tenth phase of the Moon), continues on the day of Ekadasi and ends on the Dvadasi, the day after Ekadasi (the twelfth phase of the Moon). However, complete fast is observed only on the day of Ekadasi, irrespective of gender. One should avoid consuming grains, beans, cereals, certain vegetables and spices on the day. If this is not possible, one can consume a single non-grain meal once in the afternoon or in the evening. Alcohol and non-vegetarian food should be avoided. One should not shave the body, face or head; spread oils on one's body; do not lie; or participate in tough exercise or labor. The person should engage himself/herself in chanting, hearing and reading and discussing the stories/history of the Lord and involve in other spiritual services. The pious services carried out on this day are more effective. 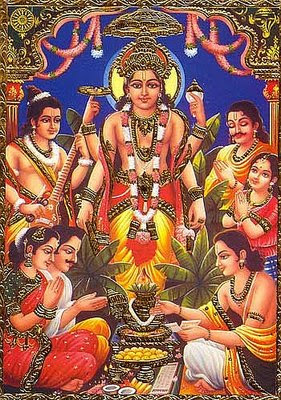 Legend says that once Lord Vishnu was fighting with a demon named Mura. As the Lord felt tired, he decided to rest from the long battle. The demon planned to kill the Lord while he was sleeping. Unexpectedly, a young girl manifested from the body of the Lord and killed the demon. The gratified Lord gave her the name Ekadasi, as she emerged on the eleventh day of the declining moon. Ekadasi was granted a boon that if anyone who fasts on Ekadashi will be set free from sinful activities and reach His abode.