Posted by Abhilash MS
Murudeshwar Temple or Murudeshwara Shiva Temple is famous Lord Shiva temple, located in the beach town of Murudeshwar, 16 km from Bhatkal in Uttara Kannada District, Karnataka. Murudeswara or Murudeshwar means Lord Shiva or Eeshwara and the statue of Lord Shiva here is the one among the World's tallest Shiva Statues, measuring 123 feet (37 m) in height. The statue of Lord Siva is constructed so that it directly gets sun light and thus appears sparkling. Located on the coast of the Arabian Sea, the town of Murudeshwara is also a beautiful picnic spot bounded by the hills of Western Ghats and situated between Honnavara and Bhatkal.


The Beach Temple of Murudeshwara towers on a small hill called Kanduka Giri, surrounded by the Arabian Sea on three sides. One can see two life-size elephants at the temple steps. On going up the hillock, there is a shrine of Jattiga seated on a horse. The 20-storied, 249 feet tall Raja Gopura is considered the tallest gopura in the world. A huge fort called Murudeshwara Fort, present behind the temple, is said to have been renovated by King Tippu Sultan of Mysore. Murudeshwar Temple has many carvings and statues that date back to a few centuries. Few inscriptions are also found in the temple. The Chalukya and Kadamba sculptures found in the temple are designed in the Dravidian style. A Nataraja statue made of bell metal is also seen outside the Murudeshwar Beach Temple.

Read the Puranic Story of the Murudeshwar Temple Here

Maha Shivaratri is the major festival celebrated at Murudeshwar Temple in a grand scale, attracting thousands of people from Karnataka and the near by states. 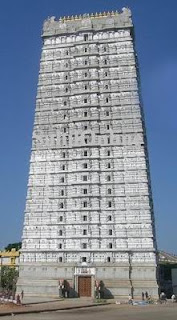 How to Reach Murudeshwar Temple

Mangalore International Airport is the nearest airport around 165 km from Murudeshwar. Hubli Airport and Goa Airport (220 km) (19 miles from Panaji) are other alternative airports.


Sri Idagunji Vinayaka Devaru Temple at Idagunji (20 km), Kollur Mookambika Temple (65 km), Gokarna - a renowned Shaivite pilgrim center (70 km), Jog Falls or Gersoppa Falls - one of the highest waterfalls in India (90 km), Udupi - a Vaishnavite coastal town famous for the Krishna Mutt or Udupi Krishna Temple (100 km), and the an ancient temple town of Banavasi (145 km) are some of the nearby places of tourist interest.