Temple and the Deity

This Ashta Vinayak shrine faces east (Purvabhimukh). The statues of elephants decorate the 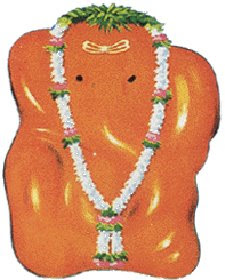 The idol of Varad Vinayaka faces east and is enshrined in the sitting posture, with his trunk turned towards the left. The stone idols of Riddhi and Siddhi are seen in the sanctum. A unique feature of Mahad Varadvinayak Temple is a lamp that is glowing continually for over a hundred years.

According to a mythology, a sage named Vachaknavi was visited by a king called Rukmangada. During his visit, the wife of the sage, Mukunda, felt attracted and expressed her love to the king. The king distorted her down and made her mad, in anger. Later, Lord Indra, the king of the Devas, came down to the earth, in the form of Rukmangada. He accepted her and an illegal son, Grutshmadha was born. The son who got to know the story of his birth prayed to Ganesha in Bhadrakavana for relieving him from the sins and the Lord granted his prayers. It is believed that Varadvinayaka fulfills all the desires of his devotees.

How to reach Varadvinayak Temple, Mahad

Shri Varad Vinayak Temple at Mahad is 63 km from Mumbai, 25 km from Karjat and 6 km from Khopoli. The temple is 3 kms off the Mumbai - Pune Highway. Mahad Bus Station, operated by Maharashtra State Road Transport Corporation (MSRTC), connects the place with other major towns such as Khopoli, Mahabaleshwar, Karjat, Alibag, and Shivthar Ghal. Mahad can also be reached via Mumbai – Panvel - Khopoli road.

Mumbai Airport or the Chhatrapati Shivaji International Airport is the nearest airbase.

Attraction in and around Mahad

Surrounded by scenic splendor, Mahad is a pleasant location for meditation as well to take bath in the nearby Ghats. The math of Gangangiri Maharaj is a notable site to visit. The place is also famous for the memorial of Dr. Babasaheb Ambedkar, who did the Satyagraha for the Dalits.

Walwan’s Dam is another attraction. The Raigad Fort (Samadhi of the Shivaji Maharaj) located around 24 km from Mahad is another major tourist spot.