Posted by Abhilash MS
Gogaji Fair or Gogaji Mela is a popular annual festival organized at Gogamedi (Goga Medi), which is 359 km from Jaipur, in Ganganagar District of Rajasthan. Gogaji Fair in Goga Medi is conducted from the ninth day of the dark half of Bhadrapada (Goga Navami) to the eleventh day of the dark half of the same month (August – September). This three day event is set up to honor Gogaji or Jahar Veer Gogga who is a folk deity of the state. In 2021, Gogaji Fair date is from 23 August to 20 September 2021.

Regarded as a warrior-hero of the region, Gogaji is highly revered by Hindus and Muslims. He is highly respected as a saint and also as a snake-god. The villagers believe that Gogaji went into samadhi at Gogamedi. You can see a Than (sacred place) dedicated to him in the villages of Rajasthan. During the Gogamedi Fair, devotees throng to worship his memorial. People believe that a snake bite can be cured by reciting his name. 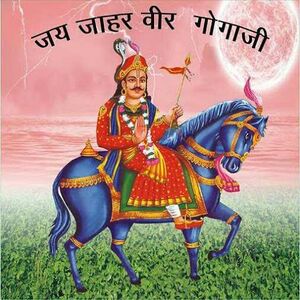 The Gogamedi Fair looks vibrant with music, dancing and singing. Displays include selling of livestock, village products and handicrafts. Some folks make this occasion a time to find matches for girls and boys. Cattle fair also takes place here which includes camels, buffaloes, cow and other animal for trade. Utensils and food shops also find place in the show. The noteworthy feature of the event is the memorial of Gogaji, which is made of marble, and has two minarets and a boundary wall.

Gogaji’s idol is placed on a blue horse with a snake coiled around his neck. The Persian inscription at the main entrance is another highlight. You can see people dancing and singing with multicolored flags called 'nishans' in their hands. Devotees worship by rubbing incense at the Samadhi. They offer coconuts, 'batashas' (sugar drops) and cash. Special prayers are recited to praise Gogaji. Another remarkable part of this trade fair is the Nath priests who are seen outside the main hall. They carry whips (copies of 'chabuk' showed in the hands of Gogaji) which are considered lucky and people make offerings to them.