Posted by Abhilash MS
Raksha Bandhan or Rakhi Festival is a Hindu festival that celebrates the sacred relation between brothers and sisters. Raksha Bandhan literally means bond of protection. Celebrated on the full moon day of the month of Shravan (July-August), Raksha Bandhan festival is famous in north and western region of India. However, it is also celebrated with great enthusiasm in southern and coastal regions, but by other names and rituals.

Raksha Bandhan or Rakhi is called by various names such as Vish Tarak (the destroyer of poison), Punya Pradayak (the offer of boons), and Pap Nashak (the destroyer of sins). Rakhi signifies the various phases of protection from evil forces and as a mark of this, the sister ties Rakhi to her brother, wishing him for happiness and well-being. This year, the Raksha Bhandhan Festival date is on 22 August 2021.

History of Rakhi or Raksha Bandhan

The origin of Rakhi Festival can be traced back to around 6000 years when Aryans created the Indus Valley Civilization. Indian history bears witness to the facts that the Rajput and Maratha queens have sent Rakhis even to Mughal kings who had rescued their Rakhi-sisters by offering help and protection. The history is also stuffed with the great Hindu King Porus who abandoned to attack Alexander, the Great. This is because Alexander’s wife approached the King Porus prior to the battle and tied a Rakhi on his hand, requesting him not to harm her husband. Thus it is not necessary that this holy thread should be given only to siblings. It can be a cousin or a friend. 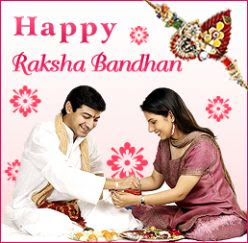 The Rakhi Festival celebration starts with a prayer and then the sister ties the sacred Rakhi string on her brother’s right wrist. The brother in turn offers gifts and money. Rakshabandhan Festival is also considered as an occasion where all members of the family enjoy the day with a get-together and have fun.

The celebration of Rakhi Festival starts much in advance. You can see people shop for fancy Rakhis, new clothes, delicious sweets and beautiful Rakhi gifts before the Shravana Purnima. On this day, after the early bath, sisters make the Puja Thali. It consists of roli, tilak, Rakhi threads, rice grains, aggarbattis (incense sticks), diyas and sweets. Prayers are offered to the deities and the sister takes Aarti for the brother and ties the holy thread on his wrist. Kumkum (vermillion) is applied on his forehead and sweets are distributed. You can see variety of Rakhis in the market, ranging from a colored cotton string to beautifully decorated balls of various sizes and materials such as soft cotton, 'zari' paper, tinsel and beads.

The festival of Gujaratis, Pavitropana or the Shravana Purnima, is the auspicious day for the three eyed God, Lord Shiva. On this day, people offer water to the Shiva Lingams in the temples and offer prayers to Lord Shiva. Worship of Lord Shiva on this day is said to relieve the sins. During the festival, a few threads of cotton are soaked in Panchagaivya (a mixture of cow's ghee, milk, curd, urine and excreta) and then fixed around the Shiva Lingam. Panchagaivya means five products taken from cow which is considered as the sacred animal for Hindus.