Posted by Abhilash MS
Udupi Krishna Temple or the Udupi Krishna Mutt is located in the pilgrim town of Udupi, about 60 km from Mangalore, in Karnataka. One of the most renowned shrines dedicated to Lord Krishna in the southern region of India, Udupi Sri Krishna Temple is highly revered by both Kurubas and Vaishnavites. The distinctive feature of Sri Krishna Temple in Udupi is that the devotees can worship the Lord only through a window which has nine holes in it called the Navagraha Kitiki.Also known as Krishna Mutt or Shri Krishna Matha, Udupi Shri Krishna Temple stands first among the Seven Mukti Stalas (seven places of pilgrimages) of Karnataka which were created by Lord Parashurama. These temples are popularly known as Parashurama Kshetras. The famous pilgrimage center, Kollur Mookambika Temple is around 80 km from Udupi and 140 km from Mangalore.


Built in the 13th century, Udupi Krishna Mutt was founded by the Vaishnavite saint Shri Madhvacharya, the great Sanskrit Philosopher and the founder of the Dvaita school of Vedanta. The entrance of the shrine faces west. At the entrance is the idol of Chenna Keshva. In the circumambulating path, devotees come across the anuyaaga sale (the hall of oblation to Fire God), the surya sale (the hall where the scholars recite Vedas and puranas) and Cinnada Koone (jewels offered to the Lord by various kings are stored here). There is a mantapa in front of the shrine. In between this mantapa and the sanctum sanctorum, there is a small passage and a window through which the idol of Lord Krishna can be seen. The significant aspect is that there is no entrance to the sanctum sanctorum and the idol of Sri Krishna or Muddu Krishna is worshipped only through this window, known as ‘Kanakana Kindi’ or Kanakanakindi. 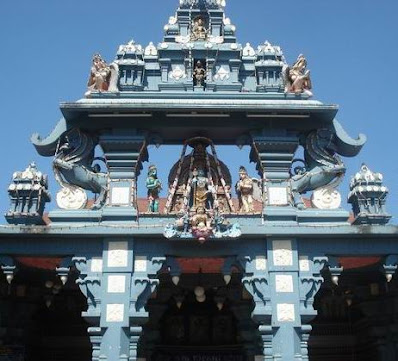 According to legends, Lord Krishna is said to have given darshan to his keen devotee, Kanakadasa, through this window. Covered with beautifully engraved silver plates, this window has nine square holes and is known as Navagraha kitiki (window of Nine Planets). The carvings depict the ten incarnations of Lord Vishnu. Inside the window is the small idol of Lord Krishna who is adorned with beautiful jewels. He has a churning rod in the right hand and rope in the left. You can also see the idol of Sri Venugopal Krishna to his right. There are also shrines dedicated to Mukhyaprana and Garuda in the temple. Proceeding towards north is the holy Tulsi plant. During the bright fortnight of the lunar month of Kartika, the Tulasi plant is worshipped with holy recitations for twelve days during the period.


Udupi Shri Krishna Temple also enshrines the statue of Sri Madhvacharya. He is seen holding a stick in one hand with the mudras of knowledge and fearlessness. A holy tank known as Madhva Sarovara is seen behind the shrine. The idol of Bhagirathi is seen here seated on crocodile. Boat festival (teppootsava) held here is the major attraction. To the northern side of the tank is the bhojana sale where numerous poor people are fed daily.

The administration and daily poojas of the Shri Krishna Mutt are managed by the Ashta Mathas (a group of eight mathas (ashrams) founded by Sri Madhvacharya). Worship services are performed fourteen times daily.

The first ten poojas are conducted in the forenoon and the remaining four during evening.

How to reach Udupi Krishna Temple?

Udupi Railway Station, managed by the Konkan Railways, lies on the Mangalore - Mumbai line and is just 3 km from the Udupi Krishna Mutt. Direct trains are available to Delhi, Mumbai, Trivandrum (Thiruvananthapuram), Ahmedabad, and Rajkot.

Mangalore International Airport (formerly Bajpe Airport) is the nearest airport located around 60 km away from Udupi.