Posted by Abhilash MS
Sabarimala Temple is the most famous and significant among all Lord Ayyappa Temples in the world. Sabarimala Ayyappa Temple is situated within the Reserve Forest area in Perinad village at Ranni Taluk in Pathanamthitta District of Kerala, India. Located in a valley surrounded by dense forest hill s on all sides, this abode of Lord Ayyappan is in the Western Ghats of India. Sabarimala (Mount Sabari) which is about 3000 feet above sea level is thronged by millions of devotees irrespective of caste, creed and religion. The pilgrimage to Sabarimala Sree Dharmasasta Temple is considered auspicious and the temple stands as an example for communal harmony. Sabarimala Temple is also referred as Ayyappa Sannidhanam by devotees.


Though there are numerous temples dedicated to Lord Ayyappan, notable among them are the temples along the Western Ghats. They are, Kulathupuzha – Lord Ayyappan is a child here, Aryankavu – A bachelor here, Achankovil - here he is worshiped as Dharmasastha with his wives, Poorna and Pushkala, and Sabarimala - here he is a yogi, meditating for all. 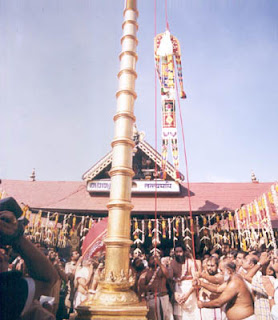 
Pamba River is the most important spot on the way to Sabarimala Temple. Devotees take a holy dip here and proceed towards the Neelimala Hill. Traditions say that the Sabarimala Ayyappan Temple and the deity of Lord Ayyappan have always been highly regarded by Pandalam Raja. As such, it is not considered good to move forward to the temple without the king's knowledge and permission. Even today, there is a representative of the king who sits on a raised platform at the base of the Neelimala Hill. The pilgrims offer their respects to him and the pilgrimage starts from here. After a 6 km trek up the Neelimala Hill is the holy abode of Lord Ayyappan.


Devotees then reach the Pathinettampadi, the holy eighteen steps, in the front side for mounting to the main temple of Sree Dharma Shastha. Only the pilgrims who carry Irumudi Kettu are permitted to climb the Holy Eighteen Steps. Other pilgrims make their entry to the temple on the northern side.


The main Sabarimala pilgrimage season is from November 14th to January 20th every year. The celebrations of Mandala Pooja (November) and Makaravilakku (January) are significant during this season. After Mandala Puja, the temple closes for five days earlier to re-opening for the Makaravilakku Mahotsavam. Pilgrims in large numbers also visit the temple in Onam which falls during the Malayalam month of Chingam and Vishu Festival in the Malayalam month of Medam. Women between the age group of 10 - 50 are not supposed to visit the temple.

Sabarimala Temple visiting timings are from 4:00 AM to 1:30 PM. The temple again opens for evening pooja at 5:30 PM and closes at 11:00 PM, after Harivarasanam Song.

There are three routes to Sabarimala - The Erumeli route, The Vandiperiyar route and the Chalakayam route. Erumeli route is the most difficult one and the pilgrims have to cover about 61 km on foot through forest and hill track. Pilgrims coming from Tamilnadu travel via Kottayam - Kumali (KK) road. On reaching Vandiperiyar, they turn to Uppupara which is only a walk of 6 km to Sabarimala. The Chalakayam route is the easiest of all. Chalakayam is near Pampa River and the temple is only 8 km from here.

How to reach Sabarimala Temple in Kerala

Sabarimala being an important pilgrimage center in Kerala, the Southern Railways and State Bus Transport corporations operate special trains and buses for the convenience of pilgrims during the Sabarimala season.