Posted by Abhilash MS
Vaikunta Ekadashi, also known as Swarga Vathil Ekadashi or Sorga Vasal Thirapu, falls on the Hindu calendar month of Marghazhi or Margashira or Margashirsha or Dhanu (mid December – mid January). Ekadashi is the eleventh day of the lunar fortnight, occurring twice a month- Sukla Paksha and Krishna Paksha. The Ekadashi in Margashira Sukla Paksh is known as Vaikunta Ekadasi or Mukkoti Ekadasi.

Vaikunta is the abode of Lord Vishnu and as such, this Ekadashi is very significant to the Lord. Special poojas are performed in Lord Vishnu Temples in India where Vaikunta Dwaram or Vaikunta Vaasal (entry to Heaven) is opened for Darshan of Lord Vishnu. 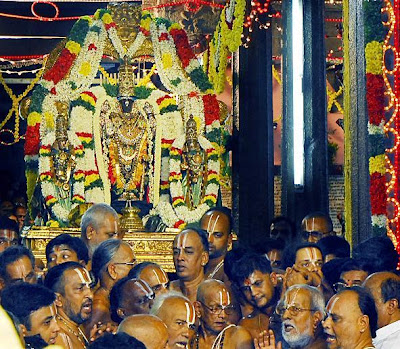 Legend and History of Vaikunta Ekadashi

According to Padma Purana (a Vaishnavite text, considered second among the 18 Puranas) the female energy of Lord Vishnu was called as Ekadashi who killed the demon Muran and protected the `Devas'. Therefore, it is said that those who worship `Ekadashi' on the day would reach Vaikunta.

Legend also has it that Lord Vishnu opened the doors of his abode for two demons, though they were against the Lord. The demons asked for the boon that those who listen to their story and see the image of Lord coming out of an entrance called Vaikunta Dwara (Doors of Heaven), they reach Vaikunta. Vaikunta Dwara is seen on the north side of the temples.

In Tamil Nadu, Vaikunta Ekadasi festival is celebrated in a grand manner at Sri Ranganatha Swamy Temple at Srirangam in Tamil Nadu, The Thiruvallikeni Parthasarathy Temple at Chennai and the temples where the presiding deity is Lord Vishnu.