Posted by Abhilash MS
Attukal Devi Temple, also known as Attukal Bhagavathy Temple, is situated about 2 km to the south-east from Sree Padmanabha Swamy Temple in Thiruvananthapuram, Kerala. One of the ancient Devi Temples of South India, Attukal Temple is situated on the banks of the Killi River. The presiding deity is Goddess Bhagavathi who is one of the forms of Goddess Parvati. Devotees considered Goddess Parvathi Devi as Amma, Attukal Amma (Attukalamma), and also Kannaki.

Attukal Bhagavathi Temple is notable for its architectural magnificence. The temple structure is a blend of both Kerala and Tamil styles of architecture. Attukal Devi Temple corridors are carved with numerous sculptures of Hindu Gods, Goddesses and the stories of Dasavataram (ten incarnations of Lord Vishnu). Also seen here are the depictions of Mahishasura Mardhini, Goddess Kali, Goddess Rajarajeswari and Sree Parvathi with Lord Paramasiva, and Lord Hanuman. The gopurams in the front are designed with beautiful icons from the story of Goddess Kannaki. The mythology of Dakshayaga, depicted in sculptures, is seen on the southern Gopura. Added attraction is the decorated gate at the entrance of the temple. 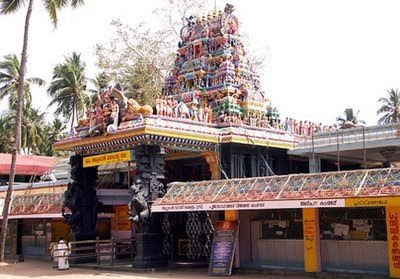 In the sanctum sanctorum, there are two idols of the Goddess. The main idol of Attukal Bhagavati is decked with gold ornaments and gems and another idol is installed by its side.

According to mythology, Attukal Bhagavathy is the divinized form of Kannaki (Kannagi Amman) the famous personality of Chilappatikaram (also spelled Silapathikaram), a sangham work of Tamil Literature written by Ilamkovadikal. It is believed that after destructing the ancient city of Madurai, Kannaki left that city and reached Kerala via Kanyakumari. She took rest at Attukal when she was on her way to Kodungalloor. Thottampattu which is sung during the annual festival is based on the story of Kannaki (Kannagi). Attukal Devi Temple was build at the place where Kannaki took rest.

Traditions say that Goddess Bhagavathi gave darshan to her ardent devotee of the Mulluveettil family, as a 12-year-old girl. She appeared in his dream and asked him to create an abode for her in the nearby ground at a spot marked by three lines. Accordingly, this temple was built at the spot.

Trivandrum Central Bus Station at Thampannor is just 2 km away from Attukal Devi Temple. While Thiruvananthapuram City Bus Station is located at East Fort is just 1.5 km from the temple.

Thiruvananthapuram International Airport, located at Valiyathura, is about 7 km from the temple.