Posted by Abhilash MS
The Jagannath Temple in Puri is one of the most renowned Hindu temples in Orissa, India. Dedicated to Lord Krishna, Jaganath temple is one of the biggest temples in Orrisa. Jagannath, which means Lord of the Universe, is a combination of the Sanskrit words Jagat (Universe) and Nath (Lord of). Lord Jagannath and his brother Balabhadra (Balarama), and sister, Subhadra, are in the form of wooden images. Sudarshan, Madhaba, Sridevi and Bhudevi are the other deities found on the Ratnabedi or the ornamented platform. Highly revered to the Vaishnava traditions, Puri Jagannath Temple is an important pilgrimage destination for Hindus, especially worshippers of Lord Krishna and Lord Vishnu.

Built in the 12th century A.D, this magnificent temple is one of the finest examples of medieval Indian temple architecture. Lord Jagannath Temple stands on an elevated platform of stone and is surrounded by a massive enclosure. There are four structures called the Vimana or Bada Deula (sanctum sanctorum), the Jagamohan or Mukhasala (the porch), the Natamandir (the audience hall) and the Bhogamandap (the hall for residuary offerings). These structures are built in a row in an axial alignment in east-west direction. The temple faces the east and is a curvilinear temple (Rekha is the name given to a type of temple with a curvilinear spire). At the top is the ‘Srichakra' (an eight spooked wheel) of Vishnu. 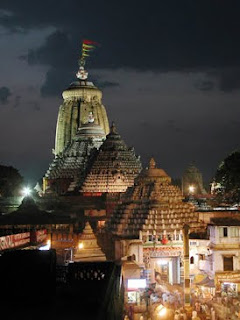 There are four gates to Puri Jagannath Temple and the main entrance is the Singhdwara or The Lion Gate. The gate faces east and the Baisi Pahacha or the flight of twenty two steps lead to the temple complex. In front of the main gate is a sixteen-sided monolithic pillar known as the Arun stambha. Other entrances face north, south and west directions and are named after the sculptures of animals guarding them. They are the Hathidwara or the Elephant Gate, the Vyaghradwara or the Tiger Gate and the Ashwadwara or the Horse Gate.

The temple complex has many Mandapas or Pillared halls on raised platforms. Notable one is the Mukti Mandap, the congregation hall of the Sevayats or the temple servitors. The Dol Mandap is noted for a beautifully carved stone Torana or arch. The arch is used for constructing a swing for the annual Dol Yatra festival. There is a rectangular stone platform called Snana Bedi where idols of Jagannath, Balabhadra and Subhadra are placed for ceremonial bathing. Various smaller temples and shrines are found within the temple complex. Shrines of Goddess Mahalakshmi and Lord Ganesh are worth mentioning.

Rath Yatra (Rathyatra) or the Chariot festival in June - July is the most important annual festival celebrated in Jagannath Temple, Puri. During the annual Jagannath Ratha Yatra festival, the idols of Jagannath, Balarama and Subhadra are taken in procession in huge chariots through the Bada Danda of Puri till their final destination at Gundicha Temple. The Chandan Yatra festival on Akshaya Tritiya day marks the beginning of the construction of the Chariots of the Rath Yatra.

Dolo Yatra, Jhula Yatra, and Snana Yatra are some of the many other popular festivals celebrated at Jagannath Temple every year.

Navakalevara is another festival celebrated at Jagannath Temple. This festival usually occurs in 8, 11 or 19 years. Last time Navakalevara festival was celebrated in the year 1996.

Puri Railway Station, served by South Eastern Railways, is well connected with all the major cities of India.

By road, Puri is well connected with other major towns and cities in India. Puri Bus Station is just 1 km from the Puri Railway Station. Jagannath Puri is around 60 km south of Bhubaneswar, the state capital. Regular buses connect Puri to Konark, Bhubaneswar, Berhampur, Taptapani, Sambalpur, Kolkata and other nearby towns and cities.

Puri being one of the major pilgrimage destination in Orissa, boasts lots of tourist attractions for pilgrims as well as tourists. Konark Sun Temple dedicated to Lord Surya situated around 34 km from Puri is one of the most famous religious places near Puri. Gundicha Mandir, Dashavatar Temple, Kalijai Temple, the Temple of Seven Mother Goddess, and Loknath Temple (Shiva Temple), Daksina Kali Temple (Daksinakalika Temple), and Astachandi Temple are some of the religious places worth visiting in and around Puri. The Lingaraj Temple in Bhubaneswar is a short drive from Puri.

For tourists and visitors, there are numerous picnic spots in and around Puri. Some of them are Chilka Lake (the largest inland salt-water lagoon), Puri Beach, Chilika Wildlife Sanctuary, Astranga Beach, Balighai Beach, Puri Museum, Sudarshan Crafts Museum, Biswanath Hill (famous for its ancient monastery of Dignag), and the historic Bhoga Mandap.