Posted by Abhilash MS
Rakshabandhan festival or Rakhi festival is a famous Hindu festival celebrated in India on the full moon of the month of Shraavana (Shravan Poornima or Shravana Purnima). Rakhi Poornima festival celebrates the sacred relationship between brothers and sisters. While Raksha Bandhan is celebrated all over India, the festival is celebrated differently in various parts of the country.
The famous Hindi Song "Bhaiya Mere, Rakhi Ke Bandhan Ko Nibhana" is sung by people during the festive occasion. The song literally means “My dear brother, please hold on to this sacred relationship of ours, forever and ever.” Rakhi Purnima festival 2021 date is on 22 August. 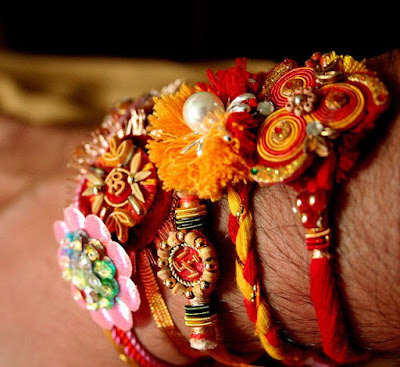 Rakhi is celebrated in western states of India as Nariyal Purnima and is dedicated to Sea God, Varuna. Narial Poornima festival is celebrated in western India and parts of Maharashtra, Gujarat, and Goa. Nariyal Purnima or “coconut full moon” marks the beginning of the fishing season for the fishermen who offer coconut to the Sea God to seek his blessings. They throw the decorated coconuts in the water with prayers and worship Lord Varun for a plentiful fish catch. Coconut Rice is prepared on the day.

In South India, Raksha Bandhan is called Avani Avittam. Also called as Upakarma, this ritual is followed by the Brahmin Community  who read Yajurveda (Yajur Veda). Avani Avittam festival is mainly celebrated in the southern and Central parts of India such as Kerala, Andhra Pradesh, Tamil Nadu, Maharashtra and Orissa.

The festival is celebrated as Kajari Purnima in the Central India including Madhya Pradesh, Chattisgarh and part of Uttar Pradesh. Kajri Purnima is mainly celebrated by the farmers, this festival denotes the beginning of the sowing season for wheat and barley. Goddess Bhagavati is commemorated on this day for good crop.

This is the festival of Gujaratis. Pavitropana or the Shravana Purnima is the auspicious day for the three eyed God, Lord Shiva. On this day, people offer water to the Shiva Lingams in the temples and offer prayers to Lord Siva. Worship of Lord Shiva on Shravana Poornima day is said to relieve the sins. During Pavitropana festival, a few threads of cotton are soaked in Panchagaivya (a mixture of cow's ghee, milk, curd, urine and excreta) and then fixed around the Shiva Lingam. Panchagaivya means five products taken from cow which is considered as the sacred animal for Hindus.