Posted by Abhilash MS
Shani Shingnapur Temple, also spelled Shani Shinganapur Temple, is one of the famous Lord Shani Temples in India, situated in the village of Shingnapur or Sonai in Ahmednagar district of Maharashtra. Lord Shani (or Shaneshwara or Shanidev) is one of the nine Navagrahas in Hindu astrology. The idol of Lord Shani (planet Saturn) here is a Swayambu, which is a five and a half feet high black rock, installed on an open-air platform. At the side of the image is a Trishula (trident) and a Nandi (bull) image is on the south side. There are also small images of Lord Shiva and Lord Hanuman in the front.


The devotees should take head bath and proceed in wet clothes to the platform of Lord Shani Bhagwan.
Saffron-colored attire is generally worn by the devotees. No priest exists here to perform the pooja. Devotees themselves perform the puja in the form of circumambulations, offering prayers and performing abhishekams with water from the holy well nearby and sesame oil. Male devotees can go up to the platform wearing a wet cloth. However, women are offered worship without mounting the platform. 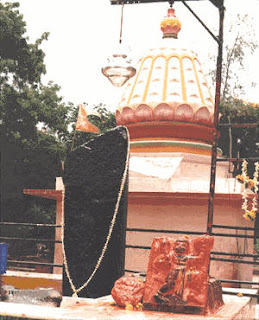 
Amavasya or the no moon day, which falls on a Saturday, is considered to be the most auspicious occasion to worship Lord Shanidev at Shani Shingnapur Temple. Numerous devotees from all around the country come here to receive the blessings of the Lord on this day. A huge fair and a palanquin procession of Shani are held on this day. Apart from Shani Amavasya, worshipping Lord Shani on all Saturdays is considered to be very favourable.


Shani Jayanti is considered as the day on which Lord Shani was born or appeared on earth. It is also known as Shanishchara Jayanti and observed on Amavasya (New moon day) in Vaishakh month. On this day, the idol appears blue in colour. ‘Panchamrut’ and ‘Gangajal’ are used for cleaning the idol of Lord Shaneshwara.

The uniqueness of Shingnapur is that no house in the village has doors, but only door frames. Even though, no theft is reported here and villagers never keep their valuables under lock and key. It is believed that god Shani punishes anyone attempting theft. Curtain is the only barrier they use to keep out stray animals.

The Shani Temple at Shingnapur is open for worship from 5 am to 10 pm.

How to Reach Shani Shingnapur Temple in Maharashtra

From Ghodegaon, devotees can use the motor-able road up to Shani Shingnapur temple. State Transport buses are available to Shingnapur from Ahmednagar and Aurangabad.