Posted by Abhilash MS
Mysore Dasara Festival or Mysore Dussehra Festival is one of the most delightful Hindu festivals of India celebrated on the tenth day of the bright half of the Hindu month of Ashwina or Ashwayuja (September - October). Regarded as the Nadahabba or Nada Habba (the State festival) of Karnataka, Mysore Dasara festival also marks the grand culmination of the 10 days annual Navratri festival. The traditional Mysore Dasara procession, Dasara exhibition opposite in the exhibition grounds opposite to Mysore Palace, and the magnificently lit up Mysore Palace on all the 10 days of Dasara makes Mysore Dasara festival a major tourist attraction for local as well as International tourists. This year, Mysore Dasara Festival 2021 is celebrated from 7 October to 15 October 2021.

Picture of Mysore Palace beautifully illuminated for the Dasara festival - The Palace will be lit up for all the ten days of the festival. 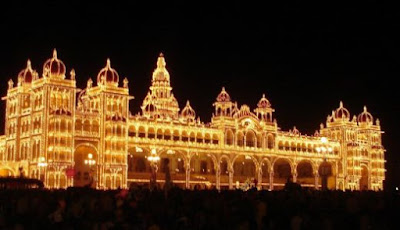 
The celebrations start with the performance of special puja by the Wodeyar royal couple to Goddess Chamundeshwari in the Chamundi Temple which is located on the top of Chamundi Hill at Mysore. During 1805, the Wodeyars started the tradition of holding a special durbar in the Mysore Palace for members of the royal family, Europeans, palace officials, royal priests and important citizens. This tradition is continued still with the present scion of the Wodeyar family, Srikantadatta Narasimharaja Wodeyar holding a private durbar during Dasara. As a custom, the king takes his ceremonial bath and worships the family deity in the palace. Then, he enters the durbar, accompanied by sacred chants and music. He worships the Navagrahas and the sacred 'kalasa' and then climbs the throne. The king worships Goddess Saraswathi on the seventh day and Mahisasuramardini (Mahishasura Mardini) on the eighth day. On the ninth day, the royal sword is worshipped and is taken on a procession consisting of elephants, camels and horses.


On Vijayadashami day, Jumbo Savari, the traditional Dasara procession is held on the streets of Mysore city in Karnataka. Previously, the king himself would lead the procession on the royal elephant, by sitting upon the decorated golden howdah, weighing over 750 kg. Now, the idol of Goddess Chamundeshwari is placed in the golden howdah and taken in a procession. This is the main attraction of the Mysore Dussehra festival. The idol of the Goddess Chamundeshwari is placed on a golden mantapa on the top of a decorated elephant. The royal couple and other invitees worship the idol before it is taken around in the procession. 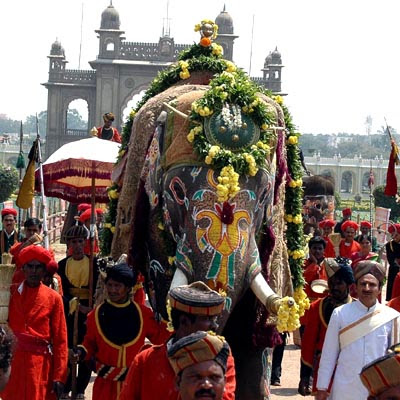 The procession is accompanied by colorful tableaux, dance groups, music bands, decorated elephants, horses and camels. It starts from the Mysore Palace and culminates at a place called Bannimantap where the banni tree is worshipped. According to a legend, banni tree was used by the Pandavas to hide their arms during their one-year period of Agnatavasa. It is said that the kings traditionally worshipped this tree before undertaking any war, to help them in the war. The festivities would culminate on the night of Vijayadashami, with an event held in the grounds at Bannimantap called as Panjina Kavayatthu (torch-light parade).


This is another highlight during Dasara. Dasara exhibition is held in the exhibition grounds opposite to the Mysore Palace. It starts during Dasara and continues till December. Various stalls of items such as clothes, plastic items, kitchenware and cosmetics are set up. Play area is also arranged for entertaining people. Governmental agencies establish stalls to denote the achievements and projects they have undertaken.
Apart from this, on all the 10 days of Dasara festival, various music and dance concerts are held in auditoriums around Mysore city. Tourists can see musicians and dance groups from all over India performing on this occasion. Kusti Spardhe (wrestling-bout), which attracts wrestlers from all around India, is also another important attraction among tourists.

How to attend Mysore Dasara at Mysore Palace


Reaching Mysore by Road - Mysore Palace is located on the heart of Mysore City, 140 km south-west of Bangalore, in Karnataka state of India. National Highway 212 passes through Mysore. Mysore is well connected by road with nearby cities including Somnathpur (35 km), Nagarhole (96 km), Bandipur (80 km), and Srirangapatna (15 km).