1) Goddess Durga – Also known as Maa Durga is an embodiment of creative feminine force and is regarded as "the invincible" one.

4) Goddess Annapurna – Also known as Annapoorna is an avatar of the Divine Mother and is the Goddess of Harvests. Anna literally means food and grains and “Purna” means complete or full. Hence Goddess Annapurna is the one who bestows food in plenty. 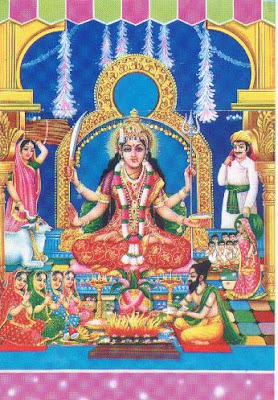 6) Goddess Bhairavi – Bhairavi is a fierce form of the Goddess. Devi took this avatar when she became the consort of the Bhairava.

7) Goddess Chandika – Also known as Chandi or Durga Sapthashati Chandika is the supreme Goddess of Devi Mahatmya. Goddess Chandi is described as the Supreme reality, who is a combination of Maha Lakshmi, Mahakali, and Maha Saraswati.

8) Goddess Lalita – Also known as Shodashi, Rajarajeshvari, or Tripura Sundari, Goddess Lalitha is one of the group of Ten Goddesses of Hindu belief, collectively called mahavidyas.