Posted by Abhilash MS
Palani Murugan Temple, also known as Pazhani Temple or Dhandapani Murugan Temple or the Hill Temple of Palani, is one of the most famous Murugan temples in India situated in the town of Palani, about 100 km southeast of Coimbatore, in Tamilnadu, India. This ancient temple, built during the 7th Century AD by Cheaman Perumal - a ruler of Kerala, is the third Arupadai Veedu among the Arupadaiveedu or the six abodes of Lord Muruga. Situated 60 km from Dindugul in Tamil Nadu, this famous pilgrimage center is located atop the Sivagiri Hill at an elevation of 1500 ft above sea level. The presiding deity is Lord Dandayudhapani Swami. The other five Aarupadai Veedu Murugan temples are Thiruchendur Murugan Temple, Swamimalai Murugan Temple, Thiruthani Murugan Temple, Pazhamudircholai Muruga Temple, and Thiruparamkunram Temple. 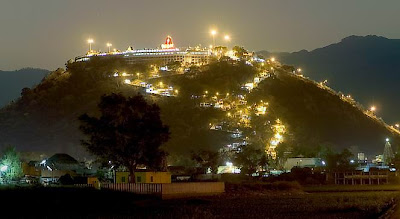 Picture of Palani Murugan Temple seen at night with lights on

Bhogar who created the Navabashana idol and sanctified the deity is said to have lived before 3,000 B.C. The shrine of Bhogar is found in the southwestern corridor of the hill temple. There are also images of Nava Durga or Bhuvanesvari and the Maragadha (emerald) Shiva Lingam who were worshipped by him. There is an underground passage which is said to link the sanctum sanctorum with the Bhogar shrine.  The walls of the shrine describe the history of the temple. 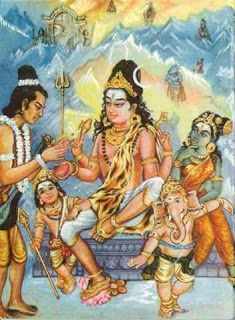 Other Temples in Palani

This is a holy tank which flows from a mountain spring. It is called as Valli Sonai and is found on the Elephant path which was constructed for the elephants to climb the hill.

Kavadi is significant to all Murugan temples in India and abroad. ‘Kavi’ means ‘saffron’ implying simplicity and ‘adi’ means ‘foot’ meaning pilgrimage. Devotees bring different types of kavadis to the temple by foot.

Tonsuring, or shaving the head, is an important feature of Pazhani Hill Temple. Devotees can perform tonsuring by paying small fees at the Tonsuring sheds.

How to reach Palani Hill Murugan Temple in Pazhani

Palani Devasthanam Information Center is located at the bus station for helping pilgrims and tourist to this famous sacred destination in India. The temple authority has arranged haulage winches and rope cars to reach the hill temple for quick conveyance.