This ceremony is held during the Tamil month of Aani (June - July), to clear the accrued impurities. During the day, sanctum sanctorum is cleaned. Specially made herbal oil prepared in the temple is applied on the golden plates of the main deities and cleaned by goldsmith. Priests and devotees visit Cauvery to take holy water in Gold and Silver pots and these pots are put in the Western side.  Once the plates are cleaned up, they are fixed up in the evening, after public worship. 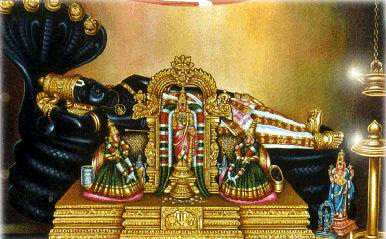 Celebrated in Tamil month Avani (August – September), this festival is celebrated to rectify the defects happened in the daily poojas performed to Lord. The festival involves the wearing of sacred thread by the Lord. On the first day, the 365 times Thiruvaradhanam is conducted to the utsavar (procession idol) in yagasalai and on the second day, 1008 times thiruvaradhanam is conducted in the sanctum sanctorum for all the deities. Then, these are fully covered with holy thread which is named as boocandi sevai(Angobanga Sevai). This festival is conducted in the Pavithra mandabam. As a result of this festival, Holy Cotton thread Garland (pavithram) is worn to all idols.

This festival is celebrated in the Tamil Month of Aippasi (October-December), also known as Dolothsavam for 9 days. During the 1st and 7th day, the Lord comes to cradle with goddess and the remaining days god alone is seen in the cradle. On the last day, Lord goes to Chandrapushkarani and Theerthvari (sacred bath) is performed. Then he returns to Oonjal mandabam and Thirumanjanam (holy bath) is performed. At night, the idol is taken back to sanctum sanctorum. This festival commences eight days before Ekadasi during the dark fortnight of the month Aippasi and the last day festival falls on Ekadasi day.

Vaikunta Ekadasi is the most important festival at Srirangam temple celebrated for twenty one days during the Tamil month of Margazhi (December - January). The festival is divided to two ten days as "Pagal pathu" and "Ra pathu". On Vaikunta Ekadesi day, Lord Ranganatha proceeds in a procession through Paramapada Vasal and arrives at Thirumamani Mandapam in the thousand pillared hall. This is the major event among all festivals conducted in the Temple. Sri Ranganatha is referred as Sri Rangaraja during the occasion. He conducts his Divine Durbar in that huge hall. Nalayira Dhivyaprabandham (the sacred collection of 4000 verses) is recited throughout the day.  The Lord gets back to the temple late in the night. Devotees observe fast throughout the day and keep vigil during the whole night. Read more about Vaikunta Ekadasi here.

Sree Krishna Jayanti or Ashtami Rohini is the birthday of Lord Krishna’s which falls on the 8th day of the dark half of the month of August-September. Here, in the Kili Mandaba Krishna temple, idol of Lord Krishna with his father Nandagopan, his mother Yasodha and Rohini are installed and sacred water is poured. The procession of Lord Krishna and Namperumal is carried along the four Chithrai streets. Read more about Sri Krishna Jayanti festival here.

This festival is celebrated thirty days before Vaikunta Ekadesi. Lord reaches Santhana mandabam, where Thirumanjanam is performed and then goes back to sanctum sanctorum in the evening. He comes to Arjuna mandabam at night, where 365 poojas are performed and 365 garments adorn the Lord. At midnight, Kaisika puranam is recited. On return to Sanctum, Pacchai Karpooram (Refined camphor) is sprinkled, before he enters the sanctum sanctorum.