In some places in India, Vedavyasa Jayanti falls on the 14th day of Vaishakh month - Vaishkha Shukla Chaturdashi. This is due to the fact that Maharshi Vyasa appeared on different occasion to spread Dharma. The date of 2021 Veda Vyasa Jayanti is on 24 May.

Veda Vyasa is a central and revered figure in Hinduism. Sage Vyasa has compiled and edited the vast volume of Hindu scriptures. Of them the main contributions include the Chaturvedas or the four Vedas; after which he is named as Vedavyasa (which means the one who complied Vedas). 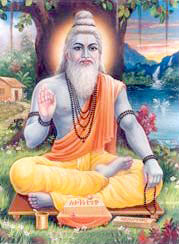 Guru Purnima or Vyasa Poornima is another major festival celebrated by Hindus in honour of Vyasa Bhagawan.