Posted by Abhilash MS
Swamimalai Murugan Temple is a famous Lord Muruga Temple situated in Swamimalai, around 5 km from Kumbakonam, in Thanjavur district of Tamil Nadu, India. The temple is the fourth one among the Arupadai Veedu or six holy abodes of Lord Muruga. The presiding deity here is Lord Swaminathan who according to legends explained the Pranava Mantra, OM, to his father Lord Shiva himself. Swamimalai is also called as Thiruveragam. The other five Arupadaiveedu Temples of Lord Muruga are Palani Temple, Thiruthani Temple, Pazhamudircholai Temple, Thiruchendur Temple, and Thiruparamkunram Temple.

Swamimalai Muruga Temple is erected in an artificially created mount which is about sixty feet height. There are about sixty stone steps, signifying the Hindu cycle of sixty years, leading to the temple. The temple has three gopurams with three praharams. The five-storey gopuram on the southern side is carved with statues.  The praharams are peculiarly arranged such that the first Praharam is at the base of the hill, the second one is halfway up the hill and the third is at the top, surrounding the sanctum of Lord Swaminathan. A unique feature of the temple is that the Lord has an elephant (facing his sanctum) as his vehicle and not the peacock. 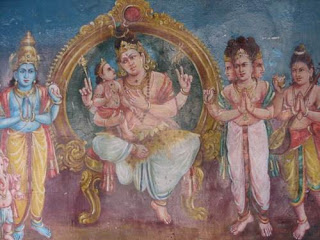 Temples dedicated to Lord Sundareswarer and Goddess Meenakshi are on the base.  A shrine dedicated to Netra Vinayakar is located near the flagpole. An idol of Lord Subramanian with Valli is seen in the inner prakaram and he is called as Senapati. In the southern side of the inner prakaram, Lord Subramanian is worshipped as Sabapathi who is seen with Devasena, with his arms stretched like that of Natarajar. There are also idols of Shammukhar with his consorts Valli and Devasena. Besides, the temple also enshrines the images of Mahalakshmi, Saraswathi, Veerabaagu, Arunagirinathar, Surya, Chandra, Idumban, and Dhandayutapani.

The stala vriksham (holy tree) is the Nellimaram which is said to be a manifestation of Bhudevi. The theerthams (sacred water sources) are Vajra theertham, Saravana Theerhtam, Netra Pushkarini and Kumaratturai (Kaveri). Legend has it that a blind devotee was restored with sight after a dip in the Netra Theertham, while he was on his way to the Netra Vinayakar shrine.

The golden chariot of the temple is worth mentioning here. It is made of seven kilos of gold, 85 kilos of silver and other metals such as copper, exquisitely lit with electric bulbs.

According to a legend, Sage Bhrugu, before starting a hard penance, got a boon that anyone who disturbed his penance would forget his knowledge. The power of his penance was so severe that the fire originated from his head and reached up to the heaven. The scared Devas approached Lord Shiva and he extinguished it by placing His hand on Sage Bhrugu’s head. Consequently, Lord Shiva became ignorant of the highest wisdom called Brahma Jnana. It is believed that he regained the wisdom from Lord Murugan who described Him with the Pranava Mantra 'OM' in Swamimalai.

How to reach Swamimalai Temple

Swamimalai Murugan Temple is about 250 km from Chennai, on the way to Kumbakonam via Thiruvalansuzhi. The temple is about 2 km from the bus stand and railway station. The place is well connected to Kumbakonam, Tiruvidaimarutur, Mayiladuthurai, Papanasam, and Tanjavur.