Posted by Abhilash MS
Goddess Lakshmi is the Hindu goddess of wealth, prosperity both material and spiritual, light, wisdom, fortune, fertility, generosity and courage. She is also the embodiment of beauty grace and charm. Goddess Lakshmi is the divine consort of Lord Vishnu. When Lord Vishnu took the Rama Avatar, Lakshmi took the incarnation of Goddess Sita Devi and married Lord Rama. And during the Krishna Avatara, Goddess Lakshmi incarnated as Radha and later Rukmini. All the wives of Lord Krishna are incarnations of Lakshmi.

Mahalakshmi is referred as “Shri” because the goddess is endowed with 6 Gunas (auspicious and divine qualities). The word ‘Lakshmi’ or “Laxmi” is derived from the Sanskrit word “Lakshya” meaning aim or goal. She illuminates our lives by allowing Good Fortune to flow from the Universal Source directly into our lives. Goddess Lakshmi means “good luck” to Hindus. 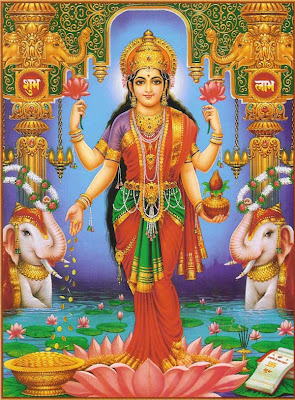 Lakshmi is depicted as a beautiful goddess of golden complexion, with four hands, sitting on a full bloomed lotus, holding a lotus bud which stands for beauty, purity and fertility. The four hands of Goddess Lakshmi stand for “dharma” or righteousness, “kama” or desires, “artha” or wealth and “moksha” or liberation from the cycle of birth and death which are considered to be the four ends of human life. Gold coins are seen flowing from her hand, pointing that those who worship her gains wealth. She is mostly depicted in gold embroidered red clothes where gold indicates prosperity and red symbolizes activity. Two elephants standing on both sides of the goddess are seen spraying water on her.

Legends behind Evolution of Goddess Lakshmi

According to Hindu Puranas, Devas (Gods) and Asuras (demons) who were always enemies were once considered mortal. To get immortality they had to drink ‘Amrit’ which is the divine nectar obtained only by churning the Kshirsagar (Ocean of Milk). For this Lord Vishnu took the tortoise form (Kurma Avatar) on which the mountain taken as churning pole was kept. The great venom spewing serpent called ‘Vasuki’ was used to churn the ocean. Lots of celestial objects came up during the churning. Among these was the goddess Lakshmi who was the daughter of the king of the milky ocean. Amrit came up only at the end. According to Vishnu Purana, Mahalakshmi always existed and she was the daughter of sage Bhrigu in the name of Bhargavi. Lakshmi accompanies Vishnu every time he comes to earth as an avatar. It is said that she left Swarga due to the curse of sage Durvasa and made Ksheerasagara her home.

How Goddess Lakshmi is worshipped

Goddess Lakshmi is worshipped not as ‘Devi’ but as ‘Mata’. As a better half of Mahavishnu, Mata Lakshmi is also called ‘Shri’, which is the female energy of Supreme Being. Her importance lies in her being an essential household deity.