Posted by Abhilash MS
Navagraha or the Nine Planets has great importance in Hinduism and Hindu rituals. Navagrahas are considered to play a major role in deciding the destiny of man. The Navagrahas are Surya (Sun), Chandra (Moon), Mangal (Mars), Budha (Mercury), Brihaspati (Jupiter), Shukra (Venus), Shani (Saturn), Rahu (North Lunar Node) and Ketu (South Lunar Node). It is believed that these nine planetary deities influence human lives and is responsible for all good or bad times, one faces in life.

The details of the nine planetary gods in Hindu religion are given below.


Lord Surya or the Sun God occupies the central place amongst the navagrahas facing the east. Also known as Ravi, Surya is the Lord of ‘Simha Rashi’ or Leo sign in Zodiac. Surya’s  vahana is a chariot drawn by seven horses. The seven horses represent the seven colors of the white light and seven days of a week. He presides over ‘Raviwar’ or Sunday, his color is red and gemstone is ruby. The practice of doing Surya Namaskar is a good practice for a healthy life. Konark Sun Temple in Orissa and Suryanar Kovil near Kumbakonam in Tamilnadu are two famous temples of Lord Surya.


Chandra is a lunar deity and is also known as Soma. The Moon represents the mind, feminine nature, beauty and happiness. He is believed to ride his chariot across the sky every night, pulled by ten white horses or an antelope. He is also called ‘Nishadipati’ and ‘Kshuparaka’. Lord Chandra is also one of the Gods of Fertility. Chandra is the god of Karka rashi or cancer zodiac sign. The mental stability and well being of a person largely depends on the placement of the moon in his horoscope. As Soma he presides over ‘Somavar’ or Monday and gemstone is pearl. Thingaloor Kailasanathar Temple near Thanjavur in Tamilnadu is one of the main Lord Chandra Temples in India. 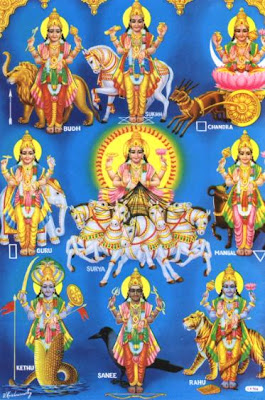 
Mangala, also called Angaraka, is a ferocious god with four hands. He is considered to be the son of Prithvi or Bhumi. Mars is referred to as a ‘hot planet’ and protector of Dharma. He holds weapons in his two hands while the other two hands are held in abhaya and varada mudras. Mesha rashi (Medam) and Vrischika Rashi (Vrischigam) (Aries and Scorpio signs) are ruled by Mangala or planet Mars. He controls the muscular system of the body an also rules over nose, forehead and circulatory systems. His vehicle is Ram (a type of sheep) and his color is red. The day of Mangala or Mars is Tuesday and gemstone is coral. Pullirukkuvelur Vaitheeswaran Koil in near Sirkazhi in Tamilnadu is one of the famous temples of Mangala or Kujan.

Read about Remedies for Mangal Dosha


Budha is generally represented with four hands, three of his hands holding a sword, a shield and a mace respectively while the fourth one is held in usual varada mudra. He rides a carpet or an eagle or a chariot drawn by lions. Mercury represents one’s intelligence and communication. The planet governs the nervous system. His color is green his day is Wednesday or ‘Budhwar’ and his gemstone is Emerald. Budha is the God of Mithuna Rashi and Kanya Rashi in Astrology. Thiruvenkadu Swetharanyeswarar Temple near Sirkazhi in Tamilnadu is one of the main Lord Budha Temples in India.


Brihaspati also known as Brahmanaspati is the guru of Devas and is praised in many hymns of Rig Veda. Brihaspati is described of yellow or golden color and holding a stick, a lotus and his beads. Jupiter symbolizes knowledge, love and spirituality. The planet rules the thighs, flesh, kidney, liver, fat and arterial system. The day of Jupiter is Thursday and gemstone is Sapphire. Dhanu Rashi and Meena Rashi are ruled by Brihaspati or planet Jupiter. One of the famous Brihaspati Temples in India is the Alangudi Abathsahayeswarar Temple near Kumbakonam in Tamil Nadu.


Lord Shukra or Planet Venus is the teacher of the demons and the author of Sukraniti. Sukra is of whit complexion, middle aged and is generally shown with four hands riding upon a golden or silver chariot drawn by eight horses. He holds a stick, beads and a lotus and sometimes a bow and arrow. Shukra Dasha actually remains for twenty years in a person’s horoscope and this planet is believed to give more wealth, fortune and luxury living, if positioned well in one’s horoscope. Venus symbolizes love and passion. The day of Venus is Friday and gemstone is diamond. Vrishaba Rashi (Edavam) and Tula Rashi (Thulam) are ruled by Lord Shukra or planet Venus. Kanjanoor Agneeswarar Temple near Kumbakonam in Tamilnadu is one famous Lord Shukra Temples in India.


Lord Shani is regarded as a troublesome god and is capable of breaking fortunes by his influence and position in the planetary system. Lord Sani is generally shown with four hands riding upon a chariot or a buffalo or a vulture. Shani is seen holding a sword, arrows and two daggers. Saturn is often referred to as ‘dark planet’ and symbolizes longevity, misery and grief. The day of Saturn is Saturday and gemstone is Blue Sapphire. Kumbha rashi and Makara rashi in zodiac signs are ruled by Lord Shani or planet Saturn. Shani Shingnapur Temple in Maharashtra and Thirunallar Darbaranyeswarar Temple in Tamilnadu are two famous Lord Shani Temples in India.

Read about Remedies for Shani Dosha


In Hindu mythology, Lord Rahu is described as the head of a demonic snake that swallows the sun and moon, causing eclipses. Rahu is a shadowy planet and do not have any special day dedicated to him. He is depicted in art as a dragon with no body riding on a chariot drawn by eight black horses. When Rahu is affected one faces several miseries and obstacles in the way of success. The gemstone of Rahu is Gomedh or Honey Colored Hessonite. Tirunageswaram Naganathaswamy Temple near Kumbakonam in Tamilnadu is one of the famous Lord Rahu temples in India.


In Sanskrit, Kethu (Dhuma Ketu) means comet. It is also a shadowy planet and is depicted as the tail of a demon snake. In the images he is usually shown with a poke marked body, riding upon a vulture and holding a mace. Lord Kethu is the representation of karmic collections both good and bad, spirituality and supernatural influences. The gemstone of Ketu is Cat’s Eye. Kethu Naganathaswamy Temple in Nagapattinam District of Tamilnadu is a famous Lord Kethu temple in India.