Posted by Abhilash MS
Goddess Parvati is one of the many forms of Shakti the strong feminine force in Hindu mythology and the feminine energy of the universe. Goddess Parvati is the animating force that brings skill, power and genius while she infuses the world with her magic. She is the divine consort of Lord Shiva - the trinity god – and the mother of Lord Muruga and Ganesha. Goddess Parvathy is also regarded as the sister of Lord Vishnu.

Evolution or Birth of Parvati

After the death of his first love Sati, Shiva isolated himself into the dark cave, buried amongst the snow covered peaks of the Himalayas and rejected the world outside. Meanwhile the demons began to attack devas and drove them out of the heaven. Lord Shiva was the only warrior who could help them to get rid of this but he was in deep meditation. The gods invoked mother goddess, Shakti and asked her for a solution. Shakti took birth as Parvati, daughter of Himavan (Himalayas), the lord of mountains and determined to draw the attention of Shiva. Goddess Parvathi would visit Shiva’s cave every day, sweep the floor, decorate it with flowers and offer him fruits hoping to win his love. But Shiva never looked at her and so she invoked Priti and Rati, the Goddess of love and longing to rouse Shiva out of meditation. 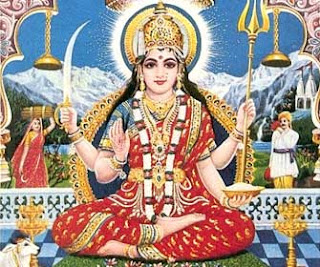 Guided by Priti and Rati, Lord Kamadeva, the lord of desire raised his sugarcane bow and arrows to infuse desire into the heart of Lord Siva. The lord opened his third eye and reduced Kama into ashes. Now Parvati took a stern decision of performing strict tapas or meditation with nothing to protect her tender body from harsh weather and eating nothing. Now Parvati matched Shiva in her capacity to cut herself from the world and completely master his physical needs. The power of her tapas shook Mahadeva out of his meditation and stepped out of his cave and accepted Parvati as his wife. Shiva married Parvati in the presence of gods following the sacred rites and took her to the highest peak of the cosmos, Mount Kailasa, the pivot of the Universe. When the two became on, Kama was reborn.

Famous Incarnation of the Goddess

Goddess Lalita Tripura Sundari is referred as the complete incarnation of Parvati. Other important incarnations of the Goddess include Goddess Meenakshi, Goddess Akhilindeshwari, and Goddess Kamakshi.

Some of the main temples dedicated to the Goddess include

The family of Lord Siva, Parvati and their sons Ganapathi and Kartikeya is an ideal example of family unity and love and are adored for a happy family and married life.