Posted by Abhilash MS
Shiva Rudrashtakam Mantra Lyrics starting with the verses Namami Shamishan Nirvan Roopam is an eight verse Octet (Ashtakam) dedicated to the Vedic god Rudra. Rudra is regarded as a manifestation of Lord Shiva. Rudhrashtakam was composed by the great Vaishnavite saint Goswami Tulsidas (Thulasi Das) – the author of epic Ramcharitmanas, a retelling of the Sanskrit Ramayana in the vernacular Awadhi langauge. The lyrics and English translation meaning of Rudra Ashtakam is provided by respected Shri P. R. Ramachander. Below is the lyrics of Rudrashtakam along with the devotional video song sung by Shri Rameshbhai Oza. Any devotee who prays Rudrashtakam with devotion will be blessed by the Lord Shiva or Shambhu.

I salute your Eesana form bereft of everything,
Who blesses, who has spread everywhere,
Who the form of Brhamam is as described in Vedas,
Who is true, who is property less, and who is everywhere
Who does not have any differences,
And who is like a sky and resides in the divine cosmos, I pray him. 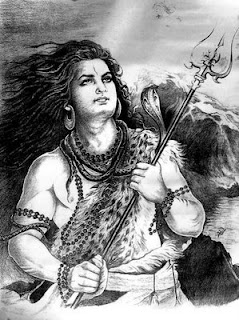 I salute that God who is without properties,
Who is the source of the holy sound Om,
Who is thureeya, who is beyond sound, wisdom and senses.
Who is the God of mountains, who is cruel,
Who is the death to God of death , who is merciful,
Who is beyond properties and the bridge to cross life.
The fourth and most holy state of human beings


I salute that God who is more whiter,
Than the Himalayas and the conch,
Who is majestic, whose shine,
Is superior to crores of god of love,
On whose head is the holy Ganges with waves,
Who wears the crescent on his forehead,
And a serpent encircles his neck.

I salute that God, with swinging ear globes,
Who has broad clear eyes, , whose face is happy,
Whose neck is blue, who is merciful,
Who wears the lion’s skin and a garland of skulls,
Who is God of all , loving and the destroyer.

I salute that God who is vehement,
Who is superior , capable and divine,
Who is limitless, who is not born,
Who has the luster of billions of Suns,
Who holds the trident , who completely destroys,
Who holds the spear, who is consort of Parvathi,
And who goes in to the state of divine.

Oh Lord you are beyond time and ages,
You are the blissful and one who destroys,
This world at the end of the eons,
You are the one who gives happiness to the good,
You are the destroyer of the three cities,
You are the Lord who grants us all,
Eternal bliss and destroy wrong passions,
And Oh killer of God of love, be pleased, be pleased.

Till one does not pray the lotus like feet,
Of Lord Shiva, men would not get pleasure,
Peace and freedom from all sorrows
In this world or in the next world,
So please bless me God who lives in all beings.

I do not know Yoga, chanting nor worship,
But I am always your devotee, Oh Shambho,
I being surrounded by old age, birth and sorrows,
Oh Lord Oh Shambo please save me from these dangers.

This octet on Rudhra has been ,
Composed by a Brahmin to please the Lord,
And the man who reads this with devotion,
Would be blessed by the Lord Shambhu

Thus ends The octet on Rudra, composed by Goswami Thulasidas.