Posted by Abhilash MS
Kukke Subrahmanya Temple, one of the significant Hindu pilgrimage places in India, is located in the village of Subramanya in the Sullia taluk of Karnataka. Kukke Temple is dedicated to Lord Muruga who is worshipped here as the serpent deity. The Lord is called Sarpa Dosha Nivaraka and as rescuer of all doshas related to serpents such as Naga Dosha, Sarpa Dosha and Kalasarpa Dosha. Kukke Muruga Temple lies on the banks of the river Dhara which takes its source from the Kumara Mountain and continues to the western sea.

Though the main entrance of the temple faces east, the devotees enter from west through main Gopuram, after taking a holy dip in the Dhara River. A Garuda pillar covered with silver is seen here. According to traditions, the pillar was fixed to protect the devotees from the poison flames which gush out from the breath of Vasuki, existing inside the temple. Next to the pillar is the outer hall and then the inner hall. A platform is seen in the center of sanctum. On the upper platform is the idol of Sri Subrahmanya, on the middle portion is the idol of Vasuki and at lower level is the idol of Shesha. Legends say that the divine serpent Vasuki and other serpents took shelter under Lord Subrahmanya, when they were detained by Garuda. A group of Lingas known as Kukke Lingas are found to the west of inner sanctum. At the southern side of the inner sanctum is the shrine of Lord Bhairava. 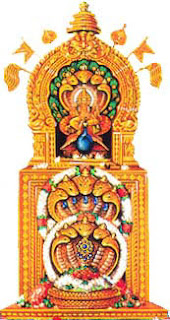 The shrine of Lord Uma Maheswara (Lord Shiva) is seen on the north-eastern side. One can also worship the deities, Surya or the Sun God, Goddess Ambika, Lord Vishnu and Lord Ganesh here. During Navaratri, special worships are offered to Ambika. Mahashivaratri is celebrated for Lord Uma-Maheswara, and on Rathasapthami, rituals are performed for Lord Surya. The idol of Vedavyasa Samputa Narasimha is found in the south-eastern side of the sanctum. Narasimha Jayanthi is celebrated for the deity during the month of Vaishaka. The shrine of mother Goddess Hosaligamma, lies to the south of the temple. Hosaligamma and Purusharaya are supposed to be the bodyguards of Lord Subrahmanya. Devotees make offerings to the deities such as Kunkumarchana, Mangalarathi and Hannukai. Other notable features of the temple are the Sringeri Mutt, Subrahmanya Mutt, the statue of Ballalaraya and Uttaradi Mutt. Darpana Thirtha, a rivulet, flows from north to south in front of Subrahmanya Mutt.

Sarpa Samskara Puja is performed to get rid of the sarpa (serpent) dosha (curse) which is said to affect a person either knowingly or un-knowingly in this birth or any of the previous births. Astrologers /horoscope writers advise the devotees to perform this pooja for their welfare. The Sarpa Samskara seva devotees need to stay for two days at the temple premises for the performance of the Pooja.

The Annual festival is held here from ‘Karthika Bahula Dwadashi’ to Margashira Shudha Poornima. On the day of Karthika Bahula Amavasya, the Lakshadeepotsava is celebrated. On the next four days, the Chandramandalotsava, Ashwavahanotsava, Mayura Vahanotsava and Flower Chariot Utsava are conducted respectively. ‘Panchami Rathotsava’ is celebrated at night on Panchami (the fifth day). On the Shashti day (sixth day), Lord Subrahmanya and Lord Umamaheshwara are taken out in procession. The appearance of the Garuda Pakshi (kite) at the time of Ratharohana and also at the time of Avabrath Mahotsava, the next day, is a remarkable feature as this bird can never be found here on the rest of the days. The annual festival comes to an end with a ritual called Maha Samprokshana.

How to Reach Kukke Murugan Temple

The nearest airport to reach Kukke Subrahmanya Temple is Mangalore International Airport (Bajpe Airport), about 115 km. The nearest railway station is Subramanya Road Railway Station (SBHR) on Mangaluru - Bengaluru railway route, which is 7 km from Kukke Temple. Kukke Subramanya Temple is easily accessible by road from Mangalore and Bangalore. The temple is about 83 km from Kasargod (Kerala), 66 km from Madikeri and 72 km from Dharmasthala.

Kumaraparvatha, a mountain range, is around 15 km from the temple. Yadakumeri Railway tunnels is a trekkers halt, located near the temple. Other tourist places include Vanadurga Devi Temple, Kumaradhara River, a garden near Biladwara, Bisile beauty spot and Mathsya Gundi (about 7km from the main temple, in Yenekal village).