Posted by Abhilash MS
Brihaspati, also known as Guru or Vyazham, is the name for the Navagraha planet Jupiter according to Hindu Astrology. Brihaspati is the Guru of Devas and is the epitome of goodness and religion. Also popular as Brahmanaspati and Devaguru, Brihaspati is considered to be the greatest beneficial among the nine Navagrahas. Concerned with education, teaching and the dispensation of knowledge, he is regarded as the god of wisdom and fluency. Guru is depicted in yellow or golden color, holding a stick, a lotus and beads. Thursdays are considered good for the worship of Brihaspati. Ill placement of Jupiter can cause diabetics, piles, tumors, liver malfunction, and blood cancer.

Main Mantra of Brihaspati or Guru

According to Shiva Purana, Brihaspati is the son of Rishi Angirasa and Surupa. The consort of Lord Guru has 3 wives – Tara, Shuba and Mamata. Brihaspati performed penance on the banks of Prabhas Tirtha to appease Lord Shiva. Shivdev pleased in his penance gave him the position of Devaguru. The mount of Lord Guru is Elephant (some pictures shows Brihaspati in a chariot drawn by eight horses). 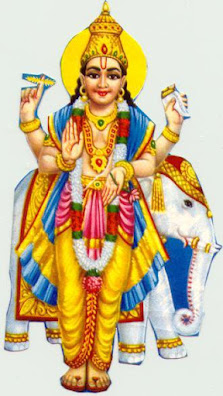 In Hindu tradition, worshipping Brihaspati results in curing the diseases related to stomach. His beneficial aspects are reputation, wealth and children.

Brihaspati is Lord of three nakshatras – Punarvasu (Punartham or Punarpoosam), Vishakha or Visakam and Purva Bhadrapada or Poorattadhi.

About 17 km from Kumbakonam on the way to Needamangalam, in Tiruvarur District of Tamilnadu is the Abathsahayeswarar Temple at Alangudi which is regarded as a Guru Sthalam. Here, Lord Dakshinamurthy (Lord Guru) is engraved on the wall and is not in the form of separate idol.