Posted by Abhilash MS
Budha or planet Mercury is one of the Navagrahas in Hindu Vedic Astrology. Planet Budh is the son of Lord Chandra with Tara or Rohini. He is personified with four hands, riding a chariot drawn by lions.  Bhudha three hands hold a sword, shield and a mace respectively and the fourth one is held in the Varada Mudra.

Planet Budha is regarded as the Hindu god of merchandise as well as protector of merchants. Planet Mercury represents research, education, intelligence, science, mathematics and the senses (mainly skin). Wednesday is relevant to him. He rules over three Nakshatras, namely, Ashlesha, Jyeshtha, and Revathi. Planet Mercury is highly beneficial Kanya rashi and its power reduces when seen in Meena rashi. 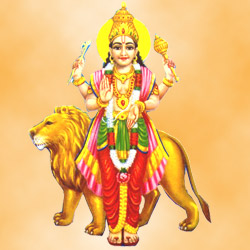 Swetharanyeswarar Temple at Thiruvenkadu, one of the 9 Navagraha Temples, is the abode for Bhudha which is located near Poompuhar in Tamilnadu.