Posted by Abhilash MS
Lord Hanuman is a commonly worshipped Hindu God, who aided Lord Rama in his fight against evil forces. He is in the form of a mighty ape and is the most popular idols of Hindu worship. Hanumanji is an ardent devotee of Lord Ram and a central character in the Indian epic Ramayana and was also very dear to Lord Rama.


The story behind the birth of Lord Hanuman says that he was born to Anjani, a female vanara (monkey) and Kesari, a male vanara, in Anjana Giri Mountain. Vrihaspati had an attendant called Punjikasthala who was cursed to form a female monkey. Her curse could only be nullified if she gave birth to the incarnation of Lord Shiva. She was reborn as Anjana and performed intense things to please Mahadeva, who finally granted her the boon that would cure her of the curse. Later when Agni, the God of Fire, gave Dasarath, the king of Ayodhya a bowl of sacred dessert to share among his wives so that they could have divine children, a part of it was snatched away by an eagle and it dropped it on top of Anjana Giri Mountain where Anjana was meditating and Pavana, the Hindu God of Wind tried to drop it to her stretched hands. After she ate the divine dessert, she gave birth to Hanuman. Thus it is believed that Lord Shiva incarnated as monkey was born as Hanuman to Anjana, by the blessings of Pavana, who was later known as Hanuman’s god father.  He was born at the auspicious hour of the morning of the 8th of the Lunar month, Chaitra at 4’o clock on the most blessed day of Tuesday.

It is widely believed that performing Hanuman pooja will help to attain strength, wisdom and knowledge. 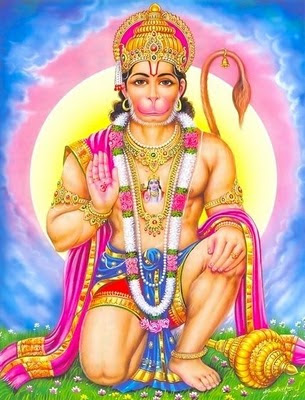 
It is believed that Lord Hanuman has the power to assume any form according to his wish. Hanumanji was well versed in Vedas and he is one of the main characters of Indian epic Ramayana. His knowledge in scriptures, his courage, and his super human strength makes everybody attached to him.

Here are some of the most popular mantras of Lord Hanuman. Click on each stotra for lyrics of Hanuman mantras


There are numerous temples dedicated to Lord Hanuman. Below is the list of some of the most famous Lord Hanuman Temples are