Posted by Abhilash MS
Lord Mangal, also known as Angaraka or Kuja or Chevaai, is one of the Navagrahas worshipped according to Hindu Vedic Astrology. Mangala, the red planet Mars, is the son of Prithvi or Bhumi, the Earth Goddess and hence is also known as Bhauma. He is the God of War and is celibate. Lord Kuja is the owner of the Aries and Scorpio signs and the teacher of the Ruchaka Mahapurusha Yoga. Mangala is depicted in red or flame color, with four arms carrying a trident, mace, lotus and a spear. Kujan is mounted on a ram and presides over Tuesday. 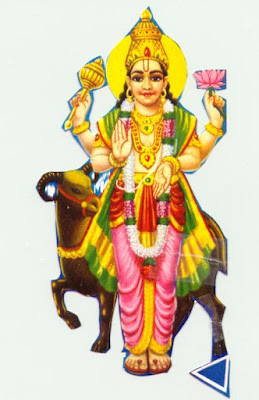 Temples of Mangala or Kuja

Lord Angaraka worship is of great importance at Vaitheeswaran Koil or Pullirukkuvelur Temple which is located near Sirkazhi in Tamilnadu.