Posted by Abhilash MS
Lord Surya or the Sun God is the chief solar deity who is the son of Kasyapa and one of his wives, Aditi. Depicted as a red man with three eyes and four arms, he rides a chariot drawn by Seven Horses which represent the seven colors of the rainbow or the seven chakras. In Hindu religion, Surya is the visible form of God that one can see every day. In addition, Shaivites and Vaishnavas regard Surya as an aspect of Lord Shiva and Lord Vishnu, respectively. Lord Surya is also one of the nine Navagrahas and is regarded as the the Lord of Grahas. Other popular names of Surya include Vivasvat, Ravi, Aditya, Pusha, Divakar, Savita, Arka, Mitra, Bhanu, Bhaskar, and Grahapati. Sunday is believed to be auspicious to him. 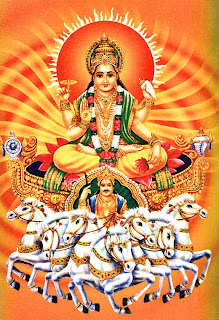 
Apart from the Surya Gayatri Mantra, another hymn associated with the Sun God is the Aditya Hridayam Stotra which was recited by the great Sage Agastya to Lord Ram on the battlefield before fighting with Ravana. Surya Ashtakam Mantra and Surya Ashtottara Shatanamavali are other popular mantras dedicated to Lord Surya.

The most renowned temple for the Sun God is the UNESCO World Heritage Site – Konark Sun Temple in Orissa. Other famous Surya Temples in India are

Navagraha Stotra of the Nine Planets
How to Perform Surya Namaskar