Posted by Abhilash MS
Narasimha avatar of Lord Vishnu is the 4th incarnation among the 10 Dashavatars. Narasimha is also spelt as Nrusimha, Narasingh and Narasingha. In Narasimha avatar, Lord Vishnu is portrayed as a half-man half-lion, with a human-like torso and lower body, and a lion-like face and claws. One of the most popular deities of Hindus, Lord Narasimha is depicted in early epics, Puranas, Upanishads and other ancient religious texts of Hinduism. The story of Narasimha Avatar is related to Lord Vishnu’s incarnation as the boar or Varaha. This image of Lord Vishnu is worshiped in deity form by various number of Vaishnava groups, all over India.

Story of Narasimha Avatar of Vishnu

According to legends, Lord Vishnu incarnated as Nrusimha to slay the demon Hiranyakashipu (the brother of Hiranyaksha who was killed by the Varaha Avatar of Lord Vishnu. The twin brother of Hiranyaksha was Hiranyakashipu who wanted to take revenge on Mahavishnu. As he wanted to become the master of all the three worlds - Heaven, Earth and Pathala, he went to Mount Mandarachala and started doing penance which continued for years. His strength of penance made Lord Brahma to appear before Hiranyakashipu. The demon asked Lord Brahma for immortality as a reward for his years of penance. He asked his death would not be caused either by man or beast, nor devil, nor god, either by day or by night with steel or stone or wood, indoors or outdoors, or earth or in sky. Lord Brahma agreed and granted his wishes. 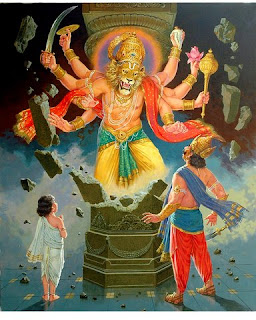 Meanwhile, Hiranyakashipu’s wife Kayadhu gave birth to Prahlad who grew up and became a keen devotee of Vishnu. But, the demon wanted his son to be a strong and cruel king like himself. He realized that Prahlad always prayed to Lord Vishnu and tried to train his son against the Lord Vishnu. However, all his efforts to influence Prahlad failed. His son remained devoted as ever to Lord Vishnu.

One day, Hiranyakashipu ordered his servants to kill Prahlad, if he refused to accept the primacy of his father. Prahlad was thrown down a mountain; he was even being drowned, poisoned, and burnt. But, all their attempts had failed because Lord Vishnu was protecting his devotee. King Hiranyakashipu who was very angry on hearing the failed attempts, challenged his son in the open court. He asked Prahlad whether Lord Vishnu is present everywhere. Prahlad replied yes which made Hiranyakashipu ferocious. After heating an iron pillar, the demon asked Prahlad to hug it, if Lord Vishnu is there. Without hesitating for a moment, Prahlad rushed towards the pillar and embraced it.  But, the heated iron did not burn him and the king in fury, hit the pillar with his mace.

From the pillar which cracked with a thundering sound, appeared Vishnu in the form of Narasimha. Half of his body was of a lion and the other half of a man. He had large moustaches on the face and terrible teeth in the mouth and his paws had terrible nails. When the demon king hit Narasimha with his mace, Narasimha took it away. During the twilight hour, Narasimha caught hold of the demon Hiranyakashipu, sat on the entrance of the court room and placed the body of the demon on his thighs. He pierced his nails into the body of the demon and broke open his stomach. The demon was killed on the spot. Lord Narasimha was soothed by Prahlad who touched his feet and also by Goddess Lakshmi. Then Prahlad was made the King by Lord Narasimha.

There are numerous Narasimha Avatar Temples across the world. Popular among them include