Posted by Abhilash MS
Talacauvery, also spelled Talakaveri or Talakavery, is situated in the tranquil surroundings of Brahmagiri hills in Kodagu district (Coorg), Karnataka. Talakaveri is the birth place of the Holy Kaveri River and is situated at an altitude is 1276 meters above sea level. Thus, named as ‘Tala-Cauvery’, which literally means head of Cauvery. Talacauvery is a holy place and there is a small temple dedicated to Goddess Caveriamma. Every year thousands of Hindu devotees visit this beautiful pilgrimage destination to have a holy dip in the Kaveri River and to get rid of their sins.

River Goddess Kaveri is the most sacred of all the rivers as it is considered to be the garland of Lord Vishnu. It is believed that river Ganga comes to Kaveri to seek blessings. The temple has a holy tank known as Tirtha Kundike or Brahma Kundike which is fed by a perennial spring that originates from river Kaveri. Though it cannot be visibly seen, it is believed that the spring feeds the underground water flow to emerge above the ground at a distance away. 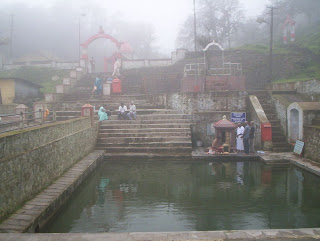 Bhagamandala and Talakaveri Wildlife Sanctuary are other tourist attractions nearby. Talakavery gives travelers a great pilgrimage experience. The mountain ranges offers beautiful sceneries are very tranquil and is bliss for the eyes.

How to Reach Talacauvery in Karnataka

Talakavery can be reached only by road. Talakaveri is located around 8 km away from Bhagamandala and 48 km from Madikeri (HQ of the district). This Hindu pilgrimage destination is well connected by Government bus services from Kerala and Karnataka. Also there are a lot of private bus services to Madikeri.

The nearest airport to reach Talakavery is Mangalore (160 km) and Bangalore (310 km) and the closest railway station is Mysore and Kasargod.