Posted by Abhilash MS
Traditional Settings of Navaratna Gemstones or the 9 Navagraha Gems. Ruby or Manikkam, the gemstone of Lord Surya, should always be placed at the center surrounded by the other 8 gemstones. In clock-wise position, the traditional arrangement of Navaratna Gemstones are as follows - from the top Diamond, Pearl, Red Coral, Hessonite, Blue Sapphire, Cat’s Eye, Yellow Sapphire, and Emerald.

Ruby or Manikkam, which represents Sun God or Lord Surya, is in the center. Ruby Gemstone gives name, fame and power to its user.

Diamond or Heera which represents Planet Venus or Lord Shukra is in the East. It is believed that a person who wears a Diamond gemstone leads a comfortable life and also it improves the name, fame artistic talents of the wearer.

Blue Sapphire or Neelam which represents Planet Saturn or Lord Shani is in the West. It removes evil effects of Lord Shani and is believed that it has the power to project its wearer to a higher status.

Yellow Sapphire or Pukharaj which represents Planet Jupiter or Lord Guru is in the North. It is believed that Yellow sapphire helps to achieve better financial status. It also strengthens vision, helps in life security and protects a person from poverty and misfortune. Hence this is a most widely used gem.

Coral or Moonga which represents Planet Mars or Lord Kuja or Mangal is in the South. It is believed that Red Coral instills courage and also cures blood related diseases. 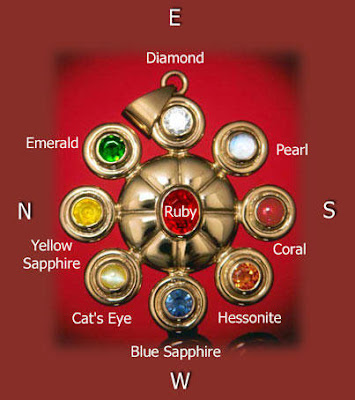 Pearl or Moti which represents Lord Chandra or Moon God should be placed in the South East position between diamond and coral. Pearl gemstone will help to calms emotions and enhance the power of memory. Moti gemstone can also help to reduce eye problems and loss of memory.

Cat’s Eye or Vaiduryam which represents Ketu is in the North West. One who wears it will be protected from hidden enemies, mysterious dangers and diseases.

Emerald or Marakatam which represents Planet Mercury or Lord Budh is in the North East. It improves efficiency related to the brain such as communication, intellect and ability to learn.

Hessonite or Gomedh which represents Rahu is in the South West. The shadow planet Rahu is supposed to be responsible for all sorts of delays or very late fulfillment of ambitions. This stone improves relations with people and protects the wearer from sudden misfortunes.