Some of the main significance include

1) Kollur Mookambika Temple is an important seat of Shakti worship in India, where the Goddess is worshipped in 3 forms - Goddess Parvati, Goddess Saraswati and Goddess Lakshmi.

3) The right half of the Jyotirlinga is regarded as the 3 Hindu Trinity Gods - Lord Brahma, Lord Vishnu and Lord Mahadeva. The left half stands for the three Hindu Goddesses Parvati, Lakshmi and Saraswathi.

4) Legend has it that Hindu saint and Vedic scholar Adi Shankaracharya had a vision of Goddess Mookambika Devi and installed the Devi at Kollur. 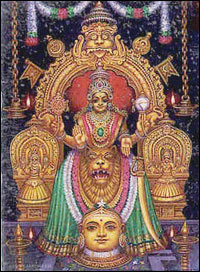 5) Kollur Mookambika Temple is one among the 7 Muktisthala pilgrimage places in Karnataka.

8) Goddess Mookambika Temple situated at the bottom of lush Kodachadri peak and the banks of the Sowparnika River offers beautiful sights and a very warm feeling for the devotees.

9) The Garuda’s Cave at the banks of river Sowparnika is believed to the cave where Suparna (Garuda) did a penance to appease the Goddess.