Posted by Abhilash MS
Hinglaj Mata Temple is one of the famous Hindu Temples in Pakistan, dedicated to Goddess Shakti, the consort of Hindu God Shiva. One of the Shakti Peethas of Goddess Sati Devi, Hinglaj Mata Mandir is situated in Hinglaj town on the Makran coast in the Lasbela district of Balochistan in Pakistan. Hindus believe that this small Cave Temple is the place where Sati’s head fell when Lord Vishnu cut the body of Goddess Sati to stop Lord Shiva’s grieves after her death. Hence Hingalaj or Hingula became a sacred Hindu destination visited by thousands of devotees from Pakistan as well as India. 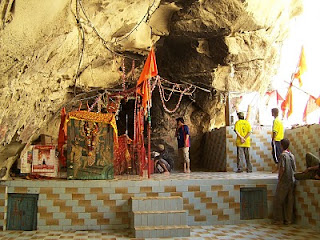 The annual Hingalaj Mata Puja which falls during the 13th day of the Krishna Paksha of Chaitra Month (March – April) is a major festival celebrated at Hinglaj Mata Mandir in Pakistan. This year, Hingalaj Mata Puja date in on March 19, 2015.