Posted by Abhilash MS
Ketu or Kethu is one of the Navagraha planets in Hinduism. Ketu is the descending or south lunar node. Generally referred to as a shadow planet, Kethu is believed to have a great impact on human lives. In Hindu mythology, Ketu is the lower part of the celestial snake, neither feminine nor masculine. It presides over number 7 in Indian numerology.  Ketu is regarded as the body of Rahu, after the head of the demon was cut off Lord Vishnu.


Ketu is the planet that influences spirituality and associated with the Matsya Avatar of Lord Vishnu. This Graha is believed to bring prosperity to the family of his devotee, removes the effects of snakebite and the ailments arising out of poisons. Besides, it also grants good health, wealth and cattle. Ketu is not as malefic as Rahu and is regarded as the Moksha Karaka (liberator from the cycle of birth and death). 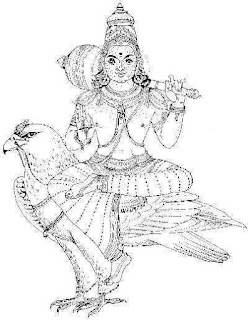 Ketu is the lord of three Nakshatras - Ashvini, Magha and Mula. Ketu puja is recommended for those who have malefic Ketu in their horoscopes.

Keezhperumpallam Temple near Tarangampadi in Nagapattinam District of Tamil Nadu is a renowned Kethu Sthalam.