Posted by Abhilash MS
Lord Parasurama is the 6th Avatar of Lord Vishnu and belongs to the Treta yuga. Parashurama was born as the son of a Brahmin father Jamadagni and a Kshatriya mother, Renuka. “Parashu” means “Axe” in Sanskrit and the name Parashurama literally means “Rama with the axe”. He is called as Brahmakshatriya (warrior Brahman), the first warrior saint. Parashurama is also called by various names such as Bhrgupati, Bhargava, Bhargava Rama, and Jamadagnya. Lord Parasurama is also one of the seven Chiranjeevis according to Hinduism.

It is believed that Lord Vishnu incarnated as Parashurama to make the earth free from the burden of cruel Kshatriya kings by defeating the evilness in them. According to Hindu beliefs, Parashurama still lives on earth, even today. Legends also has it that the state of Kerala was created by Lord Parasurama. The coastal area of Kerala and the Konkan region, which is the coastal region of Karnataka, Goa and Maharashtra States, is also sometimes called Parashurama Kshetra (Parashurama's country). 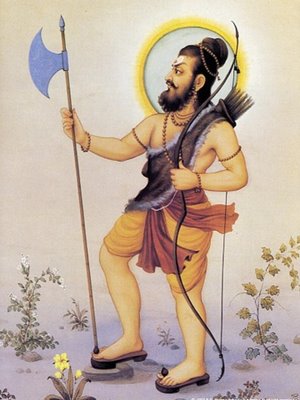 There are numerous ancient temples that are consecrated by Lord Parasurama. According to Hindu scriptures there are mainly eight temples which are popularly known as Parashurama kshetras which include the famous Kollur Mookambika Temple, the Mahabaleshwar Temple in Gokarna and Koteshwara Shiva Temple and Udupi Krishna Temple.

Though Lord Parasurama is not worshipped popularly like Lord Rama and Lord Krishna, there are a few famous temples such as